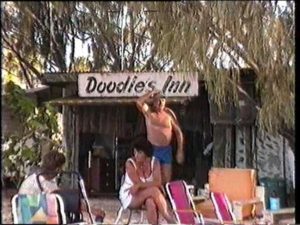 Squatters? Are they a thing of the past? During the recent Easter holidays, much to the dismay of some locals, people were camping not far from the patrolled beach area out the front of the Surf Club. And, are backpackers learning that there are caravan parks and allocated areas for parking overnight, rather than pulling up in the street to ‘camp for the night’? Our historical writer, Ian Ross, tells us more about squatters at Inskip Point, there until the 1990s…

Previously, I wrote about the jetty at Carlo Creek and the old jalopies stored there to access the back beach.

At the southern end of the Cooloola region, on the north shore of the Noosa River across from Noosaville, there was a similar collection of old vehicles that had been rafted across the river and a rough track had been hacked through the bush to access the north shore beach, now known as Teewah Beach.

There wasn’t a jetty, so would-be travellers wanting to get to the north shore would row across the river in a dingy.

It’s unlikely that the buggies traversing the north shore beach and those further north on the back beach, ever reached the almost 50 kilometers to Double Island.

Then there was the challenge of getting around the point where there were no tracks, except those made to service the lighthouse.

Things of course would change. In 1963, sand mining commenced on the north shore, two years ahead of the sand mining at Rainbow Beach.

To get their product out, the sand miners paid for a cable-operated ferry to be installed across the Noosa River north of Tewantin. They initially kept the ferry for their own use, only relenting to allow landowners on the north shore access.

Eventually, fishermen and beach campers were allowed to use the ferry as long as they stayed clear of the mining plant. When sand mining ended, the ferry passed into private hands and has never looked back.

There are two ferries today and a well-graded track now exists behind Double Point to link Teewah Beach to Rainbow Beach.

In 1965, Queensland Titanium Mines built a narrow bitumen road from their dry plant at Rainbow Beach to service their two wet plants, the larger operating south of Pelican Bay and a smaller plant around the Inskip Peninsula.

It was now possible to travel to Inskip Point by bitumen road. The mining company was reluctant to allow access to this road but eventually issued permits to use it, on the strict condition that users pull over and give way to mining trucks.

Camping at Inskip Point expanded rapidly as conventional two-wheel-drive vehicles could now access the foreshore. Similar expansion was taking place on Teewah Beach where access to the beach from the road provided by the sand miners was easy.

The question was, where did one camp? There were no rules.

All the land from the Noosa River to Inskip Point and Fraser Island (except the lighthouse at Double Island Point) was Crown land under the administration of the Department of Forestry, who showed little interest in any supervision, preferring to maintain their pine plantations and logging operations inland.

Campers began to stake their claims, leaving equipment on site which might have been a rough shed, an old kerosene refrigerator or even a caravan. As time passed, the rough sheds became fully functional cabins with kitchens and bedrooms.

These structures were close to the beach and subject to the elements. During a cyclone in 1972, a number of them built adjacent to the lagoons at Double Island Point were washed away. 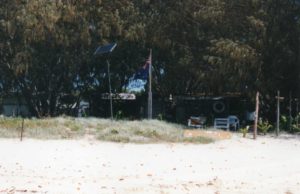 Doodle’s Inn Inskip Point 1993 They had solar power, refrigeration, Television and all amenities

In 1975, the Cooloola National Park was declared and things would have to change. The National Park Service was not against organised camping in declared areas but permanent structures were absolutely taboo and needed to be removed.

The question was, how to find the owners?

These people were squatters so there were no titles or any way to identify them. Removal demands were placed on the structures along the length of Teewah Beach and the few remaining at Double Island Point. Slowly, but surely, they disappeared.

Widgee Shire Council, the local authority at the time, showed no interest and most of the squatters north of Rainbow Beach remained. This would continue for 20 years with many of the camps at Inskip expanding.

In 1996, the Inskip Peninsula Recreational Reserve was established with the National Park Service as administrator.

It would be different from the recreational areas within the National Parks. Dogs leashed and under control were allowed, also horses were allowed on the beach.

The shanty town, however, that now existed on the peninsula had to go and be replaced by regulated camping areas where campers would have to pay.

Thus, squatting at Cooloola came to an end.

Some of the Inskip structures had been there for 30 years!