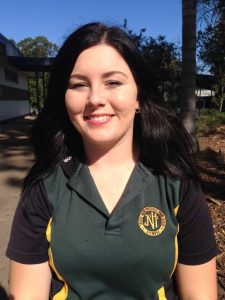 Gympie Eisteddfod Grand Champion Instrumentalist and bursary recipient is Sam Montgomery from Rainbow Beach. John and Sandy Brosnan and family are extremely proud of her achievements and, amazingly, Sam only picked up an instrument in high school!

We caught up with Sam to find out more about her love of music. “I have been in Eisteddfods since Year 4 at Rainbow Beach State School,” Sam told us.

“I sung in Mrs Mason’s choir for my primary years, and then continued to go to all Eisteddfods from Year 8-12 playing individually and in bands.”

Sam began with cello and trumpet in Year 8, and impressively started off on grade 5 cello after just six months of home practice. She began receiving private lessons in Year 10, and is now working on her grade 8 and certificate of performance.

The Gympie Eisteddfod has been an enjoyable challenge for this naturally gifted musician. “I entered non classical, classical, duet, championship, and with the school: stage band, concert band, string ensemble and LARK (a small string group).

“I also performed at the Sunshine Coast Eisteddfod for stage band and concert band. I came first in non classical, duet and championship and second in classical. All bands came first in their sections.”

Sam’s matter-of-fact response belies the skill and musicality involved in doing so well so consistently. We asked what her favourite piece is, amongst everything she has worked on.

“My favourite piece is Julie-O, which is a cello piece and is unaccompanied. I played that for the championship,” she smiled.

“I was surprised about winning, as the other competitors were all excellent, but I was pleased and glad that my song choices impressed the judge as they were polar opposite genres.”

When Sam is not busy with Eisteddfods, she can be found playing in the JNSHS stage band, concert band, string ensemble and LARK. And that’s not all…

“I perform in Gympie at cultural events such as the Gympie Show, Winter on Mary, and Lady Mayoress Night.

“I also play at art gallery openings, private weddings and birthdays, fanfare, Eisteddfods, the State Honours Ensemble Program (SHEP) at the Conservatorium of Music, the Noosa Jazz Festival, Little Kids Big Day Out, and much more.”

Surprisingly, Sam has no future dreams to become a professional musician. “I am not planning for a musical career as it is a hard industry to make it into… I will continue to play music as a hobby, but I hope to pursue physiotherapy.”

Despite her feelings for music as a career, Sam is keen to pass an important message to teenagers and younger children who are thinking of picking up an instrument.

“It is never too late to learn. I started in high school…all it takes is practice and determination.”