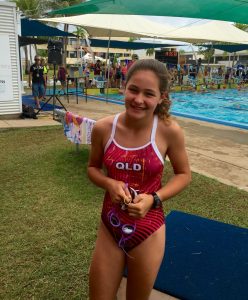 Jasmin White from Rainbow Beach and the Warriors Swim Club

The day after she arrived in the Northern Territory, her 200m medley relay team took out fifth place, out of 10 teams competing.

Her support crew – parents Andy and Dee, and sister Annie, cheered her on a couple of days later to come third in the 50m breaststroke heat with a great personal best of 42.28 seconds.

Swim club is back on!

With the first club night on October 6 at 5pm, with nominations due 6pm October 4. Nominations to be emailed to aquatic@rainbowsportsclub.com or fill out a form from the kiosk at the Centre.Rainbow Beach swim club is great way to keep children and teens active and swim fit for Nippers and school carnivals without the hassle of travel and fuel cost.

Come along to a club night to see what it’s all about and let the children have a go. All ages are welcome to join the swim club with ages 7 and under free, and 8-year-olds at half price.

Said Dee, “We are so proud of our Jazza. There was stiff competition but she did an amazing job.”

Jasmin trains approximately three times a week with coach BJ Parton. “Some kids competing here in Darwin train up to eight times a week and have their coaches here with them,” Dee said.

What an achievement, well done!