On July 18, Cooloola Dragons were hosts for the third round of the Wide Bay Series and some serious racing was seen.

Again the racing was very competitive with 1770 winning the day. Cooloola recorded a third place. But – in the novelty Diamond Dash for Cash race after lunch – we won (prize money was donated by The Sleepy Lagoon Hotel).

Many boaties and residents were probably thinking us mad over the last two weeks when we practised the triangular course. This was a timing race when boats raced against the clock around a set course. I hope our spectators enjoyed the spectacle. 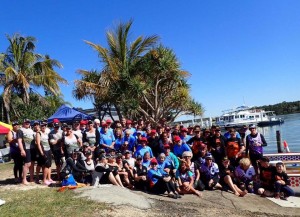 Then on Sunday 19 we hosted the Annual Sleepy Lagoon Sports Regatta. Teams from Sunshine Coast, Brisbane, Gold Coast, Bribie Island , 1770, Bundaberg, Hervey Bay and a combined team from Springfield Lakes and Laidley joined in the racing.

The sports competition was won by the strong Te Waka team from Brisbane.

A special competition was included in the program for the Breast Cancer survivor paddlers. This Year marks the 20th Anniversary of Dragons Abreast and we celebrated the occasion with a special cake made and decorated by our good friend Beth Houston.

The final Wide Bay series race will be held at Hervey Bay on August 1. Stay tuned.

Hope to see you on the water soon.