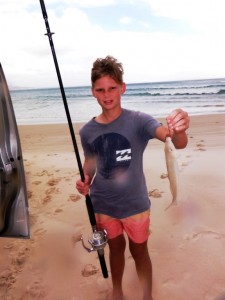 Why is it we have perfect conditions throughout the week and windy conditions ready for the weekends?

With the run of warmer weather later in the month, we have seen a few crabs being caught along with the odd mangrove jack. School and spotty mackerel have also been reported with the mouth of Carlo Creek being worth a shot.  Chopper tailor were also active in this area – try around dusk and dawn for best results.

Strong winds made conditions on the bay rather uncomfortable and the beach was a mess but some solid whiting were being caught, around Double Island Point.

Mid-month, we continued to receive reports of diver whiting in good numbers throughout Tin Can Bay, the added bonus this week has been the arrival of the tailor inside the bay. Whilst the numbers aren’t in plague proportions it is still early in the season and we should see them increase over the coming weeks.

Golden trevally and squid are still active around Norman Point and will be worth a crack once the wind dies down.

Earlier in the month, rain wreaked a little havoc on the water clarity, but it certainly didn’t slow down the fishing with reports of diver whiting in good numbers throughout the bay.  A mix of squid, yabbies, beach worms and even the Gulp 2”Sandworms performing well, with most reports of people bagging out on fish in the mid 20s.

The flush of fresh water has also stirred things up with the crabs, with reports of muddies being caught not only in the creeks but also around the sand flats.

There were reports of plenty of flathead being caught with areas such as the mouth of Alligator, Meyers and Teebar worth a try.

The beaches were fishing well with dart, whiting and flathead coming from the surf gutters around Teewah, Double Island and Rainbow.

With good numbers of pippies on the beaches it’s worth refreshing yourself with the bag limits, as there have been a few people fined of late who have exceeded theirs.

If you’re keen for a fish and need to seek shelter from the wind, try creeks such as Teebar and Kauri. Pelican Bay will also offer protection from the southerly wind, although the boat ramp at Bullock Point is in dire need of some TLC.

The lagoon at Double Island Point will also be another option for land-based anglers to escape the wind – try for whiting, bream and dart.

Even though the sand at Mudlo Rocks is slowly coming back after the rough conditions earlier this month, there are still a number of exposed rocks causing people some grief with at least two 4WDs being lost to notorious sections of beach last month.

Best bet is to plan your trip and take the freshwater track, or ask locals and check the Cooloola Conditions reports, rather than becoming another photo on the ‘wall of shame’ at the Rainbow Beach Hotel.

Have a great month and stay safe on the water.