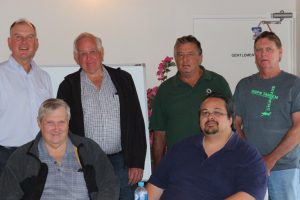 It is an industry in turmoil following the recent recommendations proposed by the Department of Agriculture and Fisheries that the Trawl Fishery be locked into five zones and only by leasing or buying from other operators, can you enter other zones to work.

Blindsided by The Hon. Mark Furner MP Minister for Agricultural Industry Development and Fisheries who claimed prior to the recommendations being released: “As the managers of our fisheries resources, we also want a more responsive fisheries management system that avoids drastic and urgent changes.”

While claiming to be effecting reforms proposed by MRAG they are picking the worst bits out and these changes are unprecedented in the history of the industry.

MRAG was guided by the principle that: ‘Queensland will receive maximum benefit from the use of its fish stocks where harvesters are provided with secure access rights to a share of the sustainable catch, and they are allowed maximum flexibility to enjoy benefit from those rights without compromising the opportunities’.

Commercial fisherman and a member of the QSIA Board of Directors, Kevin Reibel said: “What we want to do is explain that we are not against reform, we probably need some reform, but the recommendations that have been taken from MRAG will crucify the industry.

“In the past my licence extended from the NSW border to the bottom of Torres Strait, no-one will survive these recommendations. Families will not survive.The government is not listening to us.
They say yes … but this is how it’s going to be. ”

Shadow Minister for Agricultural Industry Development and Fisheries and Forestry, Tony Perrett MP who was at the meeting said:

“The fear of commercial fishers is well founded and they are bringing their concerns directly to me.

“There are hundreds of commercial fishers up and down the coast who are fearing for their livelihoods.

“This is about the implementation of the MRAG report and Government cherry picking sections of it to suit their agenda is showing contempt for this vital industry.

“Of course we need to find the right balance which recognises the interests of commercial and recreational fishers.

“The Government’s approach seems to be more about undermining confidence in the commercial industry.

“I haven’t met one commercial fisherman who doesn’t want their industry to be sustainable.

“Commercial fishers need to know that their business can be profitable and that there’s a future for them and the next generation.

“People who aren’t lucky enough to catch fish want to be able to go to their local seafood shop and purchase locally caught product.

“At the end of the day the Minister needs to get out and argue the science instead of only providing motherhood statements.