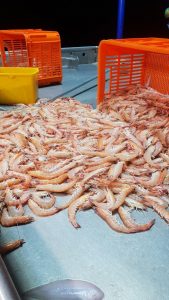 Despite repeated requests by the Queensland Fishing Industry to the government to ban imported prawns, still this week imported green prawns were being sold in supermarkets.

Imported prawns carry the threat of disease and if they infect our local product with contagious whitespot it will decimate the local seafood industry – we are saying this again – don’t buy imported prawns – ever.

Commercial fisherman and member of the QSIA Board of Directors, Kevin Reibel said: “The government is not really taking much notice. The Federal and State Government need to be stood up and told to listen.

“Industry has been telling the government for 20 years not to allow this stuff to be imported but under the free trade agreement, it is still being allowed. Once somebody buys that prawn from the supermarket, there is no control where it goes from there and just because it says ‘dont use for bait’ it doesn’t mean people won’t.

“The prawns have been coming out of Vietnam for years and the industry has been saying it needs to stop.