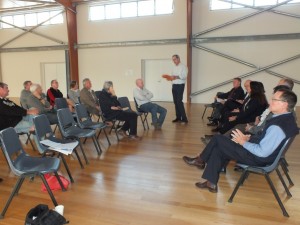 Although attendance from the community was poor, (many had not heard it was on), the Meet the Mayor and Councillors Forum held in Rainbow Beach last month drew plenty of issues forth and some brilliant new suggestions:

Slow Vehicle Parking Bays between Gympie and Rainbow Beach would allow slow vehicles to pull over, and improve safety on our roads.

Why the budget for the Rainbow Beach dump (one million dollars) is double that allocated for tourism for the “jewel in the crown of Gympie region”? Council say environmentally landfill never should have been there, and it has been a target for three spot fires in recent weeks. Plans are in place for a staffed transfer station, opened for limited hours.

Town Entrance The mesh fence will be covered up – with screens printed. It was suggested that tree plantings would also enhance the entrance in front of the failed development. The community raised problems such as logs across the dirt track, erosion, a dead tree and how to build a “sense of welcome”.

Beautification of Rainbow Beach Council were for Rainbow prospering and visitors returning. Work has been started on clearing gardens toward the skate park. Playground enhancements, moving the toilets behind the first garden so they are not the first thing you see as you approach the headland,  and creating walkways in Laurie Hanson Park are all allocated in the budget.

Stair access to the beach Noted by Cr Mark McDonald they were long overdue and a cause for frustration”. The “engineering nightmare”, would be back approximately 50m from where they were, with the old stairs remaining as a look out.

He said, “There will be a call for tenders in August, to be awarded by early October. Construction should be completed by Christmas and we are well on the way to that path!”

Why do residents pay for and receive restricted water use, when tourists have free access? There was also a concern that the town infrastructure was “lagging behind” our needs or potential growth.

The Master Plan will help determine future needs, but it was argued that the needs of a camper are much less than one sprinkler running for an hour on sandy soil. Council see it as their responsibility to absorb the cost to encourage visitation. Restrictions were there to ensure our reservoirs don’t run dry.

Illegal sleeping in vehicles Noted as a huge issue for the coast. Low cost, overnight stay options were required with toilets/water/clean showers. Self-contained RVs were a different issue to backpacker vehicles.

The loss in income to the coast was considerable because we were not listed in RV friendly camping guides. Council noted they made provisions for Gympie Showgrounds to house 30 to 40 vehicles and were going to investigate options provided in neighbouring regions.

If we really want to attract tourists we need free wifi, a big issue in the tourism industry. Council’s Tourism Advisory Committee made a recommendation along those lines last month as well.

TV reception Some residents (particularly in Rainbow Shores) have gone four months without a TV signal, it seems due to changes in the aerial in Carlo Road. Council will advocate to the relevant authorities for this to be resolved.

Coast Road Council say the coast road Counter Road is the preferred route (rather than Cooloola Way) economically and politically if we are to harness support from the Fraser Coast region.

Golf Course All undeveloped land was returned to State government hands and the golf course was unfortunately part of that. The Master Plan will indicate strategic use of land – one of the best ways to disperse effluent is on a golf course.

It seems that there is little hope of obtaining a lease, but a community group may be able to obtain a licence to operate. Currently it is “not suitable tenure” for what was described as our “most wonderful parklands”.  Community members and Council will continue to lobby the Department of Natural Resources and Mines.

Rainbow Shores Drive into Pacific Boulevard should be sealed and completed, or closed. Council said the only option is closure, with pedestrian access available.

What is the plan for restraining the Mini Sandblow? It is now visible from town and encroaching on council land. Cr Mark McDonald has taken this issue to the Council’s Environment department and is working with NPWS.

Other issues raised that will be addressed or advocated by council included council debt, mulch and weed risks, Curra to Cooroy progress, road surfaces, bright streetlights in Naiad Court, beach access signage and safety at Pacific Boulevard and works in Tin Can Bay/Cooloola Cove.

The forums will appear regularly in the council calendar, and will be rotated around communities on the coast and region.