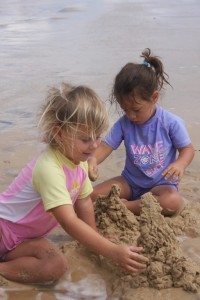 Slip on a shirt, slap on sunscreen…. Kiara Craig and Zia McPherson have fun in the sun

Australians and Queenslanders in particular, are exposed to very high levels of UV radiation. But many visitors to our shores feel compelled to return home with tanned skin as evidence of a holiday in an exotic location.

Local baby boomers were brought up the same way, as Dr Smith points out. “My post-war parents pursued the outdoor lifestyle in a hedonistic way. And the consequences of a lifetime of sun exposure are skin cancers in its various expressions.”

Most Australians are aware of the typical image of a large blue-black skin lesion, but “things are not always so black and white,” he says.

“The melanoma I frequently see is a particular subtype related to chronic heavy sun exposure – it is called a lentiginous melanoma. In its early stages it looks like a flat tan patch on the upper back or shoulders.”

“It generally doesn’t raise suspicion because the skin is covered in all sorts of tan patches and the initial growth is slow. Some may have been present for years and appear unchanged.”

“These are the subtypes I would definitely like to see in the early stages.”

Last week Dr Smith saw four melanomas, which is what prompted him to speak about the problem. “Luckily three were in the early stages and confined to the upper level of the skin. One, however, was a level four. These tumours are capable of invading organs, such as the brain or lungs.”

Damage to the DNA of skin cells can occur early in life. “A child’s skin is delicate and sensitive and is much more easily damaged. It is a parent’s responsibility to provide protection and education.”

“In Australia we have had some effective programmes, such as the ‘Slip, Slop, Slap’ message. In Europe they don’t have the public education we have here and neither do they have GPs with training and experience in skin cancers and melanomas. Over there, it is the realm of a specialist dermatologist.”

So what can you do? Regular self-examination and assistance from a partner or friend to inspect inaccessible areas of skin is important. Any new, or changing, lesion should definitely be checked by a professional. Level one lesions can be cut out, but advanced tumours may require alternative treatment.

“Modern technology and drugs are having an impact, but there is a long way to go,” warns Dr Smith. “The rate of melanoma is still rising.”