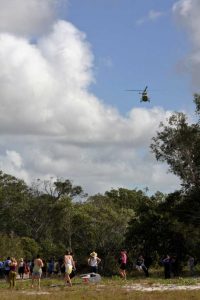 School kids, teachers and parents watched on as a helicopter landed on the oval during sports day

You may be surprised to learn that many people drive past the Police Beat office whilst talking on a mobile phone. Some people even look into the office on their way past – as if feeling guilty – but the phone still remains firmly attached to their ear as they drive on by.

Perhaps they don’t understand that such ‘distraction’ renders them a far higher chance of being involved in a crash – equivalent to driving whilst over the limit.

Indeed, the first fatal accident that I went to involved a young male driver on the phone to his father at the time of the crash…you can only imagine the anguish of the father on the other end of the line…

Of course, many people are of the perception that ‘it won’t happen to me’ – a frame of mind that is difficult to change.

To that end, however, fines for using a mobile phone whilst driving are now $353, accompanied by 3 points. For people who don’t want to pay that sort of money, there is an easy solution: pull over to make the call (it just might save you more than $353…)

Typically June is a quieter month for local police, but that hasn’t been the case this year…

The most notable incident involved a 22-year-old man who used a knife to attack the side of a vehicle containing a man, his 21-year-old partner and their children.

While the conflict stemmed from a history between the two men, the female driver suffered an anxiety attack during the incident, resulting in multiple cardiac arrests. Credit here must be given to paramedics, who undoubtedly saved the woman’s life.

Credit must also be given to our local school students, who sacrificed part of their sports day to enable the rescue helicopter to land on their oval.

Meanwhile, the offender was detected returning from Inskip Point and, conveniently, was intercepted at the front of the Police Beat, where a knife was located in his vehicle. The 22 year old man has now been remanded in custody on charges of Threatening Violence and Wilful Damage.

Let’s hope July will not be so intense.

On a final note, some of you reading this article will be visiting for the Fishing Classic. We wish you welcome, and ask that you take security precautions with your prized rods and reels. Be aware that flathead may not be the only bottom-dwelling species to find your fishing gear irresistible.