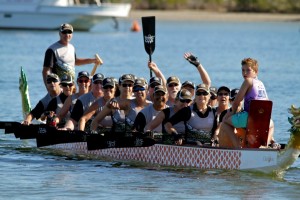 Last month saw the annual influx of dragon boat crews to Tin Can Bay and Rainbow Beach, for a big weekend of racing.

In near perfect conditions, the beat of drums and thud of paddles rang out, as Dragon Boats took to the waters of Snapper Creek, in a wonderful display of colour, camaraderie and friendly competition that has come to characterise the first regatta of the Queensland dragon boat season.

The local Cooloola Dragon Boat Club was proud to host the eleventh annual ‘Sleepy Lagoon Hotel Dragon Boat Regatta’, which was attended by 9 Qld clubs, hailing from as far south as the Gold Coast, through to our regional neighbours from the Town of 1770/Agnes Water.

With a reputation for being one of the friendliest regattas on the calendar, some clubs bring their new paddlers to Tin Can Bay for their first experience of regatta competition. Many of those paddlers have returned year after year, a testament to how much they enjoy the event, and their weekend stay in our beautiful region.

One of our most regular attendees, the Sunshine Coast Dragon Boat Club, proved to be the strongest competition again this year, with their crews taking honours in both the A & B Divisions, on Sunday… (the runners up being Redcliffe Red Dragons and Bundy Dragons, respectively). The BCS (Breast Cancer Survivors) “Pink Challenge” was hotly contested, with the eventual winners being a composite crew of paddlers from the Pink Dragons Gold Coast and the Redcliffe Pink Snap Dragons…. with Brisbane River Dragons’ Missabitatittie placing second.

Saturday’s racing, saw the local Cooloola Dragon Boat Club host and compete in Round One of the ‘Greater Wide Bay Regional Dragon Boat Regatta Series’. The four- round series, now in its fifth year, is fought between 1770, Bundaberg, Hervey Bay and the Cooloola Dragon Boat Clubs. 1770 Dragons were too strong on the day, narrowly defeating the Bundaberg crew in the final of the 200 metre races. Less than 5 seconds separated the four crews, ensuring that this year’s ‘Regional Series’ will be interesting, with more points ‘up for grabs’ in Round 2, scheduled for August 2, at the Bundaberg Sailing club.

A highlight of the week-end, was the introduction of a totally new race format, designed to create even more excitement for spectators and competitors alike…. The Diamond Dash-for-Cash!

The inaugural ‘Diamond Racing’ saw two dragon boats race on adjacent triangular courses, negotiating some tight turns, to make their way back to their starting point. A simple concept…. However, spinning the 12 metre vessels around marker buoys, called for some skilful steering, combined with more than a little strategy, on behalf of the paddlers on board.

This made for a lot of fun for the 6 crews taking part, and onlookers clearly enjoyed the spectacle, as they cheered their teams on. With prize-money ($200) on offer, the local Cooloola crew were delighted to win the event, recording the fastest times over the course and announced that their ‘winnings’, along with proceeds of the day’s events, would be donated back to local community groups.

The Cooloola Dragon Boat club would like to thank its major sponsor, The Sleepy Lagoon Hotel, for donating the prize-money for this Inaugural event and we’d like to give a timely thanks to the following groups who helped make our weekend a safe and successful one:

(Want to learn more about the fastest growing team water sport in the world?.. see the advertisement in this issue!)