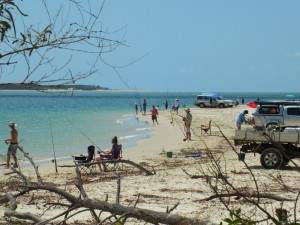 The community has been waiting for a long time to hear back on it and look forward to results.

Gympie MP David Gibson announced that a consultant team has completed the first stage of a reinvigorated master planning process for Rainbow Beach and the Inskip Peninsula to identify development potential for the area.

“Despite the doomsayers saying the town was ‘closed for business’ after that decision, it was clear from the community meeting that I chaired in June that there was strong community support for a master plan for Rainbow Beach.” Mr Gibson said.

“Local resident see a bright future for this beautiful part of Queensland and a master plan will ensure that all views are taken into account in achieving that vision.”

The outcomes of the Court’s decision, and the results of the review undertaken in stage one will be used to refresh the set of best practice land use planning principles to guide future development on the Peninsula.

The second stage will commence next month and will involve the Department of State Development, Infrastructure and Planning partnering with Gympie Regional Council to prepare a revised master plan for the entire Inskip Peninsula in collaboration with other key stakeholders.

This stage will involve public consultation and will also pay particular attention to the findings of the Planning and Environment Court’s decision on Rainbow Shores Stage 2, including an assessment of the capacity of Inskip Peninsula to accommodate future projected growth.

Mr Gibson said, ” GRC’s involvement will be in the second stage where their planning department  will be working with the Department of State Development, Infrastructure and Planning and other key stakeholders including the community to prepare the master plan. I would also expect that the local GRC councillor would take feedback from locals and pass it on to council for consideration in the process.

The outcome of the Rainbow Beach master planning process will be to identify economic development opportunities for the peninsula that protects the environmental values of the area and ensures adequate infrastructure is delivered to support development.

Documents will be linked from the http://rbcn.com.au/ when they are available.