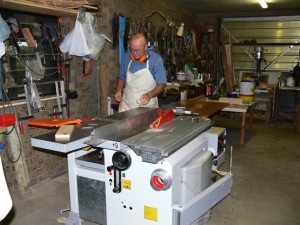 A long-time resident of Rainbow Beach died recently. Colin was born in Gympie on March 4, 1927 and spent the first part of  his life in Noosa.

His father had started the first milk-run in Tewantin when he returned from World War I, and Colin spent years delivering milk after school, and when he had left school twice a day as there was no refrigeration on the farm.

Before he was old enough to have a driver’s licence he used a horse and cart to deliver the milk and had to tie the reins otherwise the horse would bolt.

The father later sold that part of the farm and moved up the hill to start a small crops farm.  Colin was share-farming with his father here for some years and, until he bought his Fergy Tractor, would use a horse and plough.

With the Fergy Tractor he built a dam and installed the necessary irrigation with water from a natural spring. He was very innovative and was always finding ways to improve their methods of farming.

This area is where Noosa Springs Golf Course is now situated. They sent most of the produce to Brisbane but also to southern states, and at Christmas Colin would take a truck to Noosa Heads to sell watermelons.

After the war Colin, with his brother and cousin, bought army jeeps from the Singleton Army Disposals and brought them up to Cooroy where there was a good market for these 4WDs from farmers and beach-goers.

Later, after the farm was sold, the father moved to Noosa Heads to live in a house he had built next to his flats that had been re-erected from a military hospital in Maryborough, which had been dismantled and sold for removal.

Colin and his brother brought all this material down to Noosa on a truck and this involved very many trips.

Colin then bought the next two blocks and built his Beachcomber Flats for holiday letting.  With help from George Hay (Hays Island or Noosa Sound, as it is now known, was named after his family) Colin built a trawler to go prawning in the Lakes.

This boat was built in Hastings Street and launched at Noosa Woods. Colin did most of the prawning in Laguna Bay and was renowned for his success at mackerel fishing.

He joined the Surf Club and was Secretary/Treasurer for some time.  He was also Secretary of the Tennis Club and he became quite good at tennis.

In 1973 Colin and Desley (whom he had now married) were staying in the hut at Double Island Point when the Cherry Venture came ashore. The Lightkeeper had told them a ship was in trouble and they walked down the beach with him and were there when the ship beached.

In 1978 Colin sold out and moved to Rainbow Beach. He had a close connection to the area as his father had taken the family to Inskip Point for a holiday when Colin was only a lad, and with his army jeep he had often fished the beach when he had been staying at Double Island Point, in the hut which had been built by his cousins, the Pages.

They considered this area at Mudlo as their backyard. His Uncle John, who lived at Restdown on the Noosa River, had often taken his nephews into Ramsay’s Scrub shooting pigeons. They only ever shot enough for the pot. This was a great time for him.

At Rainbow they built a house on the hill so Colin could see Double Island Point and also built a duplex in the town for holiday letting.

As the house was sitting in a pile of sand when they moved in, Colin used the skills he had acquired over the years to do all the landscaping around the house, which included a birdbath he built the formwork for before concreting it. They were both very keen birdwatchers and the birds certainly seemed to enjoy their baths.

This work took some years and then Colin bought a metal lathe and taught himself enough to make anything he needed. Then he bought woodworking machinery and proceeded to make chairs for the house, occasional tables, stools, desks and trays, etc.

He enjoyed making these items and he got a lot of pleasure out of giving most of it away to family and friends. He was in every way a handyman and could nearly always find ways to fix something.

When he bought his 1942 army jeep he dismantled it completely to red lead it to beat the rust and got it all back together again. It was very seldom any of his vehicles had to be repaired professionally.

During these years they bought another caravan. They had had a seven-month trip when they first married and knew it was a good life.

Eventually this enjoyable travelling came to an end when Colin suffered a heart attack in the van when they were in Port Augusta in 2010.

Colin’s last few years have been spent quietly here in Rainbow but he had a lovely view of Double Island Point, Wolf Rock, and passing ships and lots of honeyeaters feeding in the grevillea he had planted.

He had lived a full and productive life and will be much missed. He died in the Gympie Private Hospital on August 4, 2015.