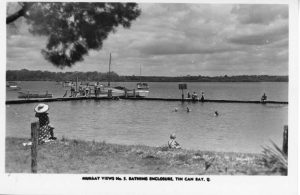 Many children, like Mary Potter, learnt to swim at the Tin Can Bay Bathing Enclosure in the 1950s illustrated on a Murray View’s postcard supplied by Gympie Regional Library

Mary Potter is well known in the Gympie Region, having cared for mums and bubs in her role as a Child Health Nurse. For Heritage Month, Mary reflects back to what Tin Can Bay was like in the 1950s.

Childhood-evoked memories of the bay – early morning stillness, calm mirror surfaces of water, the delight of swimming in those waters before school. Knowing that wet hair would identify to our teacher that we had been swimming and result in a lecture on “not swimming before school”.

It was a quiet township with clusters of houses and shacks in rather ordered streets, all with little out houses (dunnies) lined up in a row. In one cyclone all in the street would topple over.

There was the top shop, the baker, butcher and the bottom shop and Straker’s had a small sawmill and built/repaired small boats, and Chooky Mallets dairy farm supplied a billy of fresh milk for each family. The main industry was fishing and timber getting.

The landscape was open to exploring by children. There was Toolara (now Crab Creek) with a few buildings.

What delighted us here was the bubbly swamp with lots of native flowers, orchids and a profusion of Christmas bells in season.

National Trust Heritage Month is on until May 18

Gympie Regional Libraries are using the National Trust theme of Discovery and Rediscovery to highlight the history of the Cooloola Coast.

On at Tin Can Bay Library: share your story 10am on May 4 and listen to a talk about the Forestry by Ron Turner on May 6.

There are displays, information sessions and opportunities to gather stories and photographs from the community in relation to history and events that have occurred in the Cooloola Coast region from before the settlement of Europeans to now.

It was our custom to disappear up here when we had rather tried our mother’s patience, to collect old dead wood and a small bunch of flowers, this we had found, led to our misdeeds being forgiven.

There was the whole openness of the front of the bay with the cliff rounding off down to Norman Point at the end – it was easy to catch fish, collect oysters, yabbies, and play and swim on the sand mindful of the channel.

The Bay mirrored the seasons, choppy and grey, bright and sparkling blue or still and calm with rain squalls depending on the weather.

The other side was Snapper Creek with the public jetty enclosing the swimming pool area. Rolly Crane taught us the finer arts of swimming strokes here. Whilst we spent many hours in the water during school holidays, safety rules were instilled and community residents were watchful of the local children.

School was a large part of our lives at this time; the day started with parade, the flag and ‘God Save the Queen’. We filed into class in ordered lines and sat straight backed on the long forms at the desk.

Slates and pencils were provided for each child, there was often much rubbing out as we progressed through the passage of maths and spelling. Learning of tables and poetry by rote and reading out loud was practised throughout the day.

For me I enjoyed the mystery of science, the excitement of the world of books which opened up the classics, myths and fable;, history including Australian, and spun stories of the geography of the world.

I was at a loss when trying to understand English grammar and composing essays, this improved as the reward for their completion was more access to books.

Of course every child was taught copybook handwriting and the ink wells in the desk were filled with blue ink and pens were provided, this was closely supervised.

Sewing lessons occurred once a week. We all played sport, and swung on the old Moreton bay fig trees in the school grounds. The girls played football to make the team but soon gave up playing basketball with the boys as they did not follow the rules.

Misbehaviour was not tolerated, the cane was used in this era and parents were soon notified of any issues or of their child’s behaviour or failure to progress. Mr Wilson was the headmaster when I sat for the scholarship exam and was successful, the only one in that year.

The pace of life changed when the prawning boom hit Tin Can Bay. Overnight there were many boats from all parts of the eastern seaboard and captains of different nationalities. The size of the prawns were huge, 12 plus ounces.

Interestingly the Moreton Bay Bug was not regarded as a delicacy just as a secondary catch. Fish board facilities were established; there was work required in the mending of nets, processing of the catch.

We all learnt to head prawns and a skilled workforce soon developed with workers coming from Gympie as well as the need for transport haulage. Fish market sales became a topic of interest and speculation.

It was during this time that Duncan Polley commenced his bus run to the bay and I travelled to Gympie on the weekly bus run on Monday and returned Friday, after boarding with Mrs McCormack during the week.

I attended Gympie High School and received the Domestic Science Prize for form three, it was now 1959.