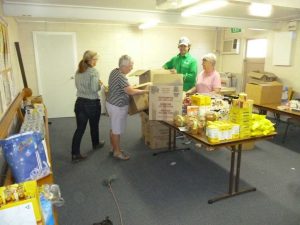 Tony said, “I am just back from taking our fourth load of supplies to Longreach where the drought is biting harder by the day. Contrary to what you hear there has been no rain over a huge area.

“The country between Barcaldine and Longreach that was green eight weeks ago now even the weeds are dead. I only saw three horses between Longreach and Blackall. No stock to be seen for 200 miles.”

“On the way home I stopped at Ilfracombe. That is where the Big Hay Run finished on the first of April – $6 million of donated hay. I caught up with organiser Brendan Farrell who has been there carting hay for three weeks and still had three days to go- a top bloke.

“I met up again with Jo Winkleman  who organises the food for the hay run and works for the Council at Ilfracombe.”

She thanked Tony for two Charter Vouchers he donated for a 14 year old girl with a brain tumour. Jo said she was “over the moon” as the raffle raised $7000 for a great cause.