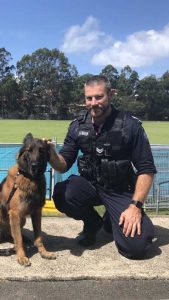 Senior Constable Liam Braunberger is the new police officer at Tin Can Bay, and he and his family will make Rainbow Beach their home

Regular readers of this column may recall that – after a 35-year career – Senior Constable Lee Jones has left the building. Rumour has it that retirement is treating him well, and that he still makes the odd local appearance between long lunches, sunset cruises and cooking his ‘signature dish’ of BBQ pork ribs. We wish him well…

Of course, the rest of us have been curious as to who would replace the old vulture, and I am now pleased to be able to introduce you all to Senior Constable Liam Braunberger.

Liam comes to us with a wealth of experience in small-town policing, having most recently been stationed in the western Queensland town of Wandoan (I had to look up where that was!). Needless to say, the sight and smell of the ocean is a novelty for Liam at the moment…and so too is the sound of rain on the roof.

Prior to Wandoan, Liam was stationed in Brisbane, Indooroopilly and Ferny Grove – and previously worked as an engineer in the Australian Army. It’s probably no surprise that, after all that moving around, Liam is pretty happy to be back on the coast where he can now settle down permanently with his wife and two young boys.

Liam will officially be stationed at Tin Can Bay, but will be living here in Rainbow Beach with his family. When he’s not working, you will most likely find him at the gym, fishing, or walking his two dogs. Be warned that one dog is apparently placid and the other one is crazy – he’s not saying which is which!

Like his predecessor, Liam also has a ‘signature dish’ befitting of his German heritage: and I reckon Liam’s schnitzels will be a welcome addition to Leroy’s ribs… Welcome aboard Liam!