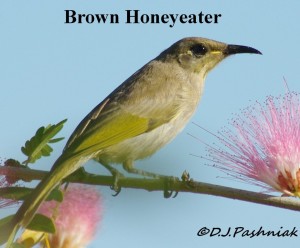 During the summer months when the sea is nice and warm I seldom want to watch any birds other than the many shorebirds around the bay.

When the shorebirds leave for the northern hemisphere and the weather is colder I start watching birds that are closer to my house. Some of them grab my attention with their bright colours and some have raucous calls that can’t be ignored. One of the smallest birds in my garden also has a very loud voice. This bird is the Brown Honeyeater.

The Brown Honeyeater (Lichmera indistincta) is only 12-16cm. It is a plain olive-brown colour down the back with a cream coloured front and is not easy to see when it is perched in among the leaves of trees or bushes.

Often I hear it singing up in a tree but when I look for it there is just a quick flash of brown as it takes off. The easiest place to see it is when it is in one of the flowering shrubs and intent on taking nectar from the flowers.

It has a variety of calls from a harsh squawk as it warns off other birds from its territory to a much more musical series of calls. To hear the calls this bird makes go to http://www.birdsinbackyards.net/species/Lichmera-indistincta . Its nest is a cup hanging in a shrub or low tree and made from grass, bark and leaves.

A couple of years ago in May, a friend called me to say she had a small nest for me to see. It had been made in a shrub that was right against her house. The birds must have decided that they would not be seen in that position.

If you want to join our monthly shorebird counts then phone Dorothy Pashniak: 54880057 and if you want to read more about the birds I see every week then visit my blog at http://www.sandystraitsandbeyond.blogspot.com.au/