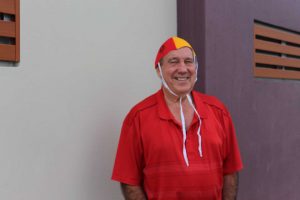 The 30th annual Variety Bash Queensland is coming to Rainbow Beach and all are invited to join in the fun on Sunday September 1 at 4pm at the Rainbow Beach Sports Club.

The annual event started in 1985 by Dick Smith, and is all about having fun and supporting Aussie kids by giving out grants of equipment and services to local kids and organisations along the route.

There will be over 100 cars at the club and 300 colourfully costumed crew for everyone to have a chat with, wish them luck and learn more about Variety, the children’s charity.

A local for 39 years and with wife Maureen, owners of the Rainbow Beach Tourist Information Centre, Sam Mitchell is on his 19th bash and his son-in-law, Robert Campbell, is on his 27th bash. This year they are driving a beach buggy…..thus the hat…

Sam’s first trip was in an HR Holden with Graham Jackman and he said: “The hardest one was the Cape York trip. There were 13 million corrugations between Cooktown and Cape York in the year 2000, with many breakdowns. We had mechanics along with us and support vehicles but I believe there is one car still up there.”

Cars are scrutineered before they take off to ensure they are safe, with the final scrutineering completed the day before the bash. Each car must be at least 30 years old.

This year the trip is from Mackay to the Gold Coast via Rainbow Beach and Oakey. The drivers and their teams will have breakfast at the Rainbow Beach School early on September 3 and leave from there for the rest of their ten-day, 3360 kilometre journey.

Let’s all go to the club to wish them luck and…. Go Sam!