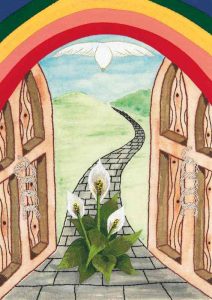 I love the first Friday of March as it’s the World Day of Prayer, when I learn about a country, its culture, joys, concerns, and problems, and pray for its needs expressed by women from differing Christian denominations and traditions, with congregations from other churches in our area.

People in over 170 countries gather to focus upon a different country each year, participating in a global ecumenical event of informed prayer, prepared by a committee of that year’s chosen country.

The Cooloola Coast 2022 World Day of Prayer service is hosted by the Catholic parishioners of St John Vianney Tin Can Bay, at 10am on Friday 4 March at the Community Centre, corner of Tin Can Bay and Bayside Roads, Tin Can Bay.

Women of England, Wales and Northern Ireland, three countries forming part of the United Kingdom, developed the theme, God’s promise to His people in exile in Babylon, based on the book of Jeremiah Chapter 29 Verse 11:  “For I know the plans I have for you,” declares the Lord.  “Plans to prosper you and not to harm you, plans to give you hope and a future.”

Angie Fox, an Embroiderer and Vestment Designer from Derby, England, is the artist of the posters and booklet cover (pictured).  Medium: Textile – Embroidery, Applique and Metalwork.

Angie writes, “Following the theme given, I have used several images to depict the key words as follows:  FREEDOM: an open door to a pathway across an endless open vista.  JUSTICE: broken chains.  GOD’S PEACE and FORGIVENESS: the dove of peace and a peace lily breaking through the pavement.  OVER ALL: the rainbow represents the overreaching love of God.”

We look forward to listening to Jacquie Cross, who is our guest speaker, most appropriately, as she came from England.

Usually we share plates of food brought by regular participants for a late morning tea afterwards.  However, given that Covid-19 is likely to be restricting us, we may need to keep it more simple, abiding by the government rules and regulations in place on 4 March.  This may mean that people who are not double vaccinated, who don’t have “the green tick” may be disallowed from joining us.

Further information: www.worlddayofprayeraustralia.org or contact Maggie Travers on Maggie1Travers@gmail.com or 0400 756 615.