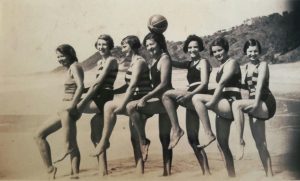 Our family has been visiting Rainbow for holidays since the early ‘70s – all school holidays and long weekends – in the caravan park, with prime spots facing the beach, and since 1978, in a house that was “built with me spanner” as the advert used to go.

But the story began way before I fell in love with Rainbow when my great grandparents used to visit in the ‘20s.  So I asked my parents, Bevan and Joy Anderson about their first memories of the area.

Bevan said: “Well, I guess it all started with my grandfather, Bert Anderson – he had a farm at the Veteran, and he also ran cattle on land he leased on what is now Cooloola Village in the late ‘20’s. They built a house at Tin Can Bay, a couple of houses, and a boat too, about 25 feet with a Rugby engine.

“They used to go fishing all over the bay, and down the straits. I guess I got my sea legs on that boat. They took me and my mum, Ruby, out when I was six months old, and you know it’s always rough down the straits… the boat was tossing from side to side.

“Mum was terrified her baby was going to fall in the water. She held on tight. Everyone was sick except for me. Apparently. When it got too rough, Pop would hoist the sail to try to calm the boat, prevent it from nosing into the waves.

“Pop and Dad used to fish in and out of the bay. They’d motor over to what is now Carlo Point – it was all mangroves and shallows around there then. You had to be careful. Pop had a long weighted rope with knots on it that he’d hang over the side to tell how deep it was.

“Anyway, they would anchor out there, then row the little dinghy into shore, and walk with a couple of hessian sacks and their fishing gear over to Mudlo Rocks. They would fish all day, sometimes overnight, then walk back with a sack or two full of fish.

“I was an electrical inspector for SEQEB, what is now Energex, in the early ‘60s, and the sand mining was just starting up at Rainbow Beach. They used a lot of electricity, of course, and so I’d have to drive from Gympie to Rainbow Beach every Thursday to read their meter. It was a very rough road. Very rough. 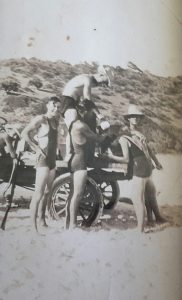 “There used to be three houses down there in what is now the main street, near where the first general store was, and essential workers from the mine lived there. One of the houses was for the mine electrician, Doug Nabour. I drove down every Thursday until I started my own electrical business with Joy in 1967. I did a lot of work at Rainbow over the years.”

Joy – “Oh, I remember going down to Rainbow with Bevan before we were married. We had a picnic on the hill. You didn’t really go down to the beach.

“I might have photos of my mum, Jessie Brown (nee Mallet), camping at Double Island Point when she was a teenager. They used to drive down in a truck and camp up there. Never at Rainbow, it was easier to get to Double Island. They were doing some building there at the lighthouse.”

Bevan remembers “Oh, that’s right, I remember my Uncle Vic Anderson was a line foreman for PMG just after the war, and he led a construction gang through the Cooloola Park to the lighthouse to put in phone lines. He used to talk about all the death adders they had to confront.”

So Mum found some of her mum’s photos from circa 1933. What a treasure trove! It is so interesting to explore family connections with a place that holds such a dear place in my heart and soul.

Sheryl Anderson is a writer, editor, and project manager. She loves people’s memories and stories, and loves to spend as much time as possible at Rainbow Beach. sherylanderson999@gmail.com