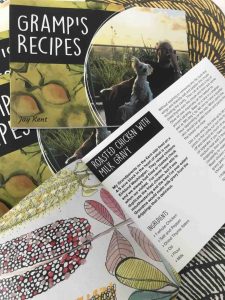 Wife Leonie says, “Well, Jay was bored so I thought a cookbook! His grandkids and families are always asking for their faves. I thought this would keep him occupied for a few months…”

The Kents are still regular visitors to Rainbow Beach, after their move to the Sunshine Coast.

Leonie promises the book includes locals’ favourites from the cafe, as well as his family’s popular staples.

“Illustrations are by me (of course). A lot of the artwork in the booklet is now owned by locals too, that I have sold at the Rainbow Beach Market!” said Leonie.

The new cook book called Gramps Recipes will also be available at the markets for $20, with the next event scheduled for January 23, 7am – 12pm.