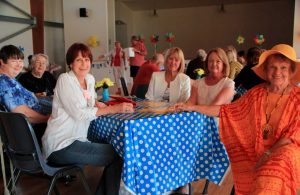 It was a beautiful Tuesday morning and as I wandered into the local hall I could hear the chatter of excited voices. After donating my gold coin and purchasing my raffle tickets I was drawn to the amazing spread prepared by the dedicated volunteers.

I was surprised that over 50 people had taken time out of their busy day to attend Australia’s Biggest Morning Tea organised by the Community Information and Resource Centre.

Once everybody was fed and watered CIRS President Heather Robertson welcomed everyone and thanked them for attending.

The fun began with lucky door prizes and raffles. Ross Brown did a fantastic job calling the winning numbers despite sometimes being drowned out by the constant hum of voices and laughter.

It made me realise what a wonderful social and fun event this is. It was a great chance for folk to catch up with friends that they hadn’t seen for a while and all for such a good cause.

Talking later to Heather Robertson it was apparent that the Centre is in dire need of volunteers. “We really need new blood here to help out. It’s just a few hours a week,” explained Heather.

“The current committee and volunteers are ready to move on. The Community Centre will close if we don’t get anyone to replace them.”

“People don’t realise the important job we do at the centre, from offering photocopying, faxing, computer and internet services to helping people in need find the right agencies to help them out.

“We are here to support both the local and wider community with our fundraising. It’s time to get some new people in here to run the show,” stated Heather.

On her way to attend the AGM after the morning tea Heather lamented, “There very well may be no Community Centre after today if no one steps up to the plate.”

What a sad thing that would be.