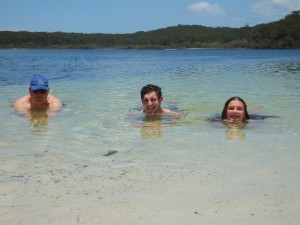 Australia’s Nature Coast has won the ‘Richard Power Award for Destination Marketing’ reflecting the success of the innovative marketing project in attracting European and other international visitors to the Cooloola, Sunshine and Fraser Coasts.

The power of the Australia’s Nature Coast (ANC) marketing strategy has seen record growth in European visitation to the region, with the Great Beach Drive – launched earlier this year – attracting significant international and domestic interest.

In the most recent International Visitor Survey (IVS), the Sunshine Coast recorded 10.6% increase in overseas arrivals to June 2015, fuelled largely by growth in the UK (up 23.7%) and Germany (30.6%) – the two markets where ANC is most heavily promoted.

Similarly, the Fraser Coast enjoyed strong international growth in the 2014-15 year, with the IVS figures showing a 14.1% increase in overseas arrivals, including 13.8% growth in the UK market and an impressive 30.5% rise in German visitors.

ANC was launched in 2013 to broaden international market appeal and attract new investment, by leveraging the unique natural assets of the adjoining Sunshine, Cooloola and Fraser Coast tourism regions.

The decision to launch the joint initiative recognised the need for diverse, product-rich natural attractions to compete collaboratively in key international markets.

Gympie Regional Council Mayor Mick Curran said, “The success of this marketing initiative in the international market highlights how regions working collaboratively can enjoy greater success than when you work on your own. Through Destination Gympie Region we have very good relationships with our neighboring tourism organization partners and as a region we are seeing the success of this with increasing visitor numbers.”

“Consumers don’t recognise regional barriers, and given our proximity and our joint commitment to nature based tourism, the partnership was an obvious one,” said Sunshine Coast Destination CEO, Simon Ambrose.

“Our strategy targeted the European market in particular because of their specific travel patterns and interests, but the success of marketing initiatives like the ‘Great Beach Drive’ has resonated far wider and we have seen major growth in the Australian, New Zealand and American markets.”