Home  »  News   »   Plenty of capacity at Inskip for campers 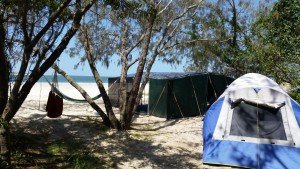 Queensland Parks and Wildlife Service (QPWS) has reopened Inskip Peninsula Recreation Area campsites while establishing a “no camping” buffer zone and a no-drive zone along sections of beach in high-risk areas, after considering an engineer’s report on a near-shore landslip in late September 2015.

“Rainbow Beach is well known to Queenslanders as the gateway to some of the most amazing natural attractions to be found anywhere in the world.

“I recognise the importance of camping to the many families that make their annual pilgrimage to Inskip over the Christmas holidays and to the local Rainbow Beach economy,” Dr Miles said.

“I can assure visitors and local businesses that there will be plenty of capacity at Inskip right across summer, and also plenty of space for campers at nearby Teewah Beach and Fraser Island.

“For safety reasons QPWS closed Inskip’s M.V. Beagle camping area and the eastern section of the M.V. Sarawak camping area after September’s near-shore landslip which caused a large, deep, submerged hole to form and swallow up a vehicle, van and camper trailer.

“QPWS commissioned a geotechnical consultant to investigate potential risks from similar events at this popular site, and provide a report to guide management of the area.

“QPWS has now received and considered the report, and has worked with the consultant to establish the ‘no camping’ buffer zone in susceptible areas along the shoreline.

“In front of that buffer zone we have also temporarily closed high-risk beach areas where people should not drive or park, pending further public consultation.

People can still walk along that section of beach, and keeping it free of vehicle traffic will also improve visitor safety on the beach.

“We’ve kept ‘lost’ campsites to a minimum and reopened the two campgrounds, while keeping safety as the priority.

“QPWS now has a temporary barrier in place defining the buffer zone, and expects to have installed a permanent low fence, as well as safety, regulatory and interpretive signage, by Christmas.

“The signs will warn people of the dangers and explain the nature of the events, for which the triggers are unknown and future events cannot be reliably forecast.

“The buffer zone will have minimal impact on the number of campers who prefer to come to Inskip, and we’re looking forward to another great summer camping season,” Dr Miles said.