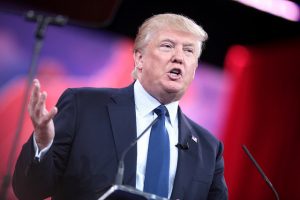 Depending on your political leanings, Trump’s brash “braggadocios”, unscripted, shoot-from-the-hip delivery, can be a breath of fresh air or a painful reminder that the smooth oration and scripted speeches of the Obama years are long behind us. American politics may never be the same.

For all the perceived divisions, did the “Trump effect” really make much difference on Election Day?

Democrats and Republicans have split the share of female voters 55/45, (+/- a few points) for the last eight election cycles. Trump’s extramarital shenanigans only cost him -2% over the Republicans 2012 candidate, Mitt Romney, securing support from 41% of female voters in 2016.

Trump also received a small bump in support from all minority voters, compared with 2012. This included a near doubling of support amongst black voters; that number doubling again recently, after Rapper Kanye West tweeted support for the president.

Even promises to “build the wall” delivered a 3% rise in support with Hispanic voters.

Despite the noise, voting demographics only shifted marginally at best. Rude Tweets and emotions aside, 2016’s election was near enough to business as usual… Statistically speaking.

Trump And The Media

Polarising “click bait” articles have become a necessary evil to drive online traffic but have eroded trust in these once honoured institutions. People’s opinions of Trump are pretty well fixed; his approval rating steady at 43%, trust in the media however has never been lower, sitting at 32%.

Every outrageous statement delivers a ratings boost for the major networks, who in turn reward Trump with wall-to-wall coverage for his next outrageous statement. This race to the bottom netted Trump an estimated $2 billion of free media coverage in the lead up to the 2016 election.

The media’s tendency to mischaracterise Trump’s statements adds unnecessary credibility to his accusations of “fake news”. Headlines report that Trump says immigrants are “animals” but a quick Google search shows that the “animals” he referred to were MS13 gang members, whose motto is “mata, viola, controla,” or “kill, rape, control” which actually leaves the insult “animals” feeling somewhat lacking.

The media’s recent misquoting of Trump’s attack line “fake news is the enemy of the people”, became a strange, self-fulfilling “fake news” prophecy.

Trump is far from the first president to be openly hostile toward the press. Abraham Lincoln famously shut down nearly 300 papers during the height of the Civil War and Richard “I am not a crook” Nixon repeatedly threatened the major TV networks with license suspensions for their critical coverage of the Vietnam conflict.

Forcing journalists to hand over their sources under threat of imprisonment seems more fitting of Communist China, than Obama’s America. Considering the Swiss cheese nature of leaks in the Trump administration, he is yet to follow Obama’s lead.

While Trump’s open hostility was poles apart from Obama’s friendly demeanor, both administrations spent roughly $40 million a year to suppress FOIA requests by the Media. White House suppression of the information is as American as apple pie… and obesity.

Trump’s diplomatic “tough guy” stance has had mixed political results.  Threats of tariffs gained concessions from the EU but his “trade war” with China is starting to cause pain for an already suffering US auto manufacturing industry.

His trolling of “little rocket man” Kim Jong Un, was comical and had beneficial outcomes. The historic meeting of North and South Korean leaders earlier this year coupled with a promising, if slightly vague, agreement on denuclearisation, can only be seen as a step in the right direction.

Cooperation with Russia has allowed some major military wins in Syria. ISIS being nearly completely driven from the country without anywhere near the bloodshed and chaos of previous Middle East interventions.

Most US presidential elections boil down to the famous talking point that helped deliver Bill Clinton to the White House, “it’s the economy, stupid”. Luckily for Trump, the economy is currently doing quite well.

Unemployment is low, the stock market is high, wages have stayed flat but polls show above average confidence in the economy. These numbers should always be taken with a grain of salt, but overall things look good.

US recession cycles are on a fairly stable 7-8 year cycle, so the current 10 years of growth can only mean a recession isn’t too far away. Trump was short sighted in claiming all the wins in the economy as his own; when the economy eventually splutters he’ll have full ownership of that too.

For all Trump’s bad and divisive behaviour, he’s neither a dictator nor Hitler re-incarnate. He’s just another president, with some good and bad policies.

Trump will be voted out in a few years time and some other president will follow doing much the same; deliver less than half of what they promise and upset more than half the public doing it.

For all its flaws, American democracy has the strength, enshrined through its Constitution, to withstand most political storms.

Trump is in the rare position of being a politician who’s in trouble for actually delivering on his promises. He came in guns and mouth blazing, saying he was going to shake things up and whether you agree with his policies or not, I think we can all agree he has definitely done just that.