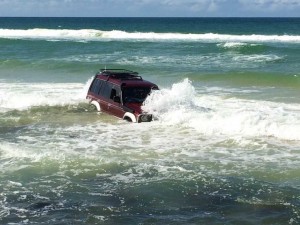 As I write this article, I have just returned from a bone-jarring patrol down the Freshwater Track. It has to be said that this is not my preferred route to Double Island Point, but the beach access has been limited throughout March due to the exposed Mudlo Rocks (making the beach route impassable even at low tide).

As much as anyone, I get frustrated when I look longingly towards that lighthouse and realise that it is “so close – yet so far away…”.

When a 10km cruise down the beach is contrasted with the hour long alternate route, it is perhaps understandable that some people look at the rocks and think: “I’ll give it a go…”.

Unfortunately, that ‘she’ll be right’ attitude has led to the loss of many a vehicle over the years. The amount of pride and joy lost has only been matched by the spectacle that it has afforded the locals – the sand hills providing stadium-like seating for the ‘best show in town’.’

Like watching Shakespeare, spectators sit on the edge of their seats waiting for a tragedy to unfold before their eyes – and they are often not disappointed!

The reality is that most of the year the rocks are covered in sand and it is the great beach drive we all know and love. Periodically, however, the rocks are exposed and can become impassable even at low tide.

Being fore-warned is easy – Facebook sites including the Rainbow Beach Community News and Rock Report Rainbow Beach are a great resource for checking conditions.

Needless to say, if in doubt, driving through the rainforest up the Freshwater Track is far preferable to getting stuck and watching the tide come in to claim your stranded vehicle.

‘If it’s flooded – forget it’ has been a well-publicised message about the perils of driving across flooded roads.

Let’s not forget that the beach is also a gazetted road (all road rules apply) and that it is also a road ‘subject to flooding’ at times. Perhaps the Rainbow Beach message could paraphrase Shakespeare himself: ‘Beware the tides of March…’ Drive safe.