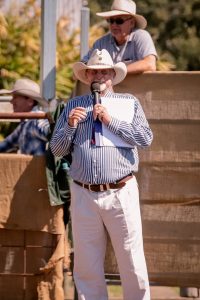 Alain Henderson was a man of extraordinary ability with an encyclopedic memory and an astute judge of livestock and will be missed by all who knew him. RIP Alain

There are enough stories in the life of Alain Henderson to fill this newspaper.

His funeral service was live-streamed by his family who were kind enough to recognise the high esteem in which he was held. The family eulogy will be shared on our website for everyone to read.

Alain was born in Cooroy Hospital on April 20, 1932 and spent his young life at 21 Wickham Street in Gympie. He had two sisters and two brothers.

He married Barbara Jean Austin in 1954. Barbara’s grandfather was Matthew Mellor, the first Mayor of Gympie from 1880-1882.

The Henderson family owned a sawmill where the Memorial Gardens now sit, milling solid red cedar and donated the land and the war memorial gates to the council.

Alain and Barbara had four children, Gai, Jeffrey, Julie and David who were all born and raised at 13 O’Connell Street, Gympie.

Barbara loved Rainbow Beach and the family claims, while he would have loved a property at Goomboorian, her love of fishing and the beach won and they settled here in the early ‘80s.

From the age of 12, Alain worked for Wallace Logan, droving from Rockhampton down the old drovers route through Bam Bam springs and onto Gympie.

After he married he started working at Big Bargain Furnishers; then Gerard and Sullivan where he began his career as an auctioneer in his early thirties.

The business name changed to Tatnel and Graham to McTaggart to Primary McTaggarts to Primac, then Henderson and Pederson, where he partnered with Ian Pederson, and they moved their offices to the corner of Mary and Monkland Streets, Gympie.

After retirement he still auctionioned property around Gympie, and auctioned at the Gympie Horse Sales as recently as two years ago.

He was most famous as a ring announcer for country shows, events, pony club, show jumping, camp drafts and his big love was the rodeos. He had an encyclopedic memory of every competitor and animal and if he didn’t…..the story goes, he sometimes even made up a story which was so good even the competitor believed it.

Someone once said: “does he know all this or is he making it up?” He knew it all.

He travelled the circuit from Gympie to Nambour, Maleny, Noosa, Mary Valley, Maryborough, Mt Larcom, Proston, Maryborough and Hervey Bay, Glastonbury and everywhere in between and ‘Hendy’ announced at every Gympie Show from 1964.

His accolades were many and he was proud to be registered in the Honour Roll of Unsung Heroes at the Australian Stockman’s Hall of Fame, of becoming the 2018 Gympie Senior Citizen of the Year and having the Gympie Show Ring entrance named in his honour.

He was a lifetime member of the Sunshine Coast Show Jumping and Equestrian club, Patron of the Kia Ora pony club, a 50-year veteran of the Mary Valley Show Society and proudly led the ANZAC Day march in Rainbow Beach in his Light Horse uniform.

He announced at the Maryborough and Hervey Bay Show Society for 27 years and the wording on his certificate sums up his work with so many clubs, charities and the cattle and horse industry:

“An astute judge of livestock with an encyclopedic memory, a genuine appreciation of animals and those who work with them, and an extraordinary ability to generate enthusiasm among spectators. “Hendy” has been in the forefront of Show Commentators over many, many years and an integral part of the success of our Maryborough Shows. It has been a pleasure for all of us to have worked with Alain.”

So while you won’t be stuck behind Hendy doing his 20km an hour ‘recce’ each morning in his Rodeo or catch him collecting his mail, he has left his mark on all of us and we thank him for sharing his wonderful life.