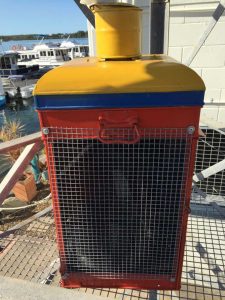 The restored light sitting up in the coast guard radio tower

Recently, the radio tower at the Tin Can Bay Coast Guard base became home to a restored relic of the old Inskip Point Light and Signal Station. It is one of the kerosene lamps used before electric light and has been restored by one of our members, Ian Sutton. Ian is one of our crew skippers and retired shipwright, and has a great interest in nautical history.

The Wide Bay Bar is renowned as one of the most dangerous bars on the coast of Queensland, largely due to the huge volume of water flowing in and out of the Great Sandy Straits, and the shifting nature of the sand that builds around the entrance.

Crossing a coastal bar even in these days with good navigation equipment and charts, is not to be taken lightly.

In the years after Andrew Petrie discovered the Mary River and the rich areas inland, settlers and trade soon followed. By 1859 the Port of Wide Bay was thriving, and then in 1869, James Nash discovered gold at Gympie. The need for a safer entry over the Wide Bay Bar was soon needed.

A decision was made in 1872 to build a pilot station at Inskip Point together with a signal station. By the end of 1872, a pilot and two crew plus two lightkeepers had been employed.

In 1875, a telegraph line had been built from Inskip Point to Maryborough, where the harbourmaster was stationed. Shortly after, a light station was also established at Hook Point.

The benefit of having a light station at Inskip is that they can signal the state of the bar to ships’ masters. By day they used pennants and flags, by night they used lights. These signals would indicate to ships whether it was safe to cross the bar.

Many accidents on coastal bars are due to skippers not being aware of the tides, or choosing to cross at the wrong time, but the lightkeepers of Inskip were responsible for saving countless lives in the 100 years they operated there.

If you are passing by the Coast Guard base, look at the radio tower and you will see one of the lights used by those early lightkeepers. The lightkeepers have gone, but always remember to talk to Coast Guard before crossing the bar.