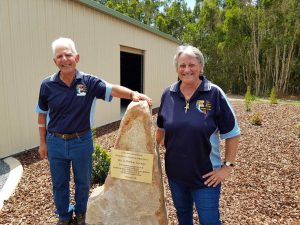 Jim and Debbie George with their lifetime members commemorative plaque

The recent 20th Anniversary and Open Day of the Tin Can Bay Fishing Club saw a great turnout with over 80 in attendance made up of club members and local supporters together with our VIP Guests, which included Mr Tony Perrett, MP Member for Gympie, and his wife Michelle, and Cr Mark McDonald, Councillor for Tin Can Bay.

Life Members and outgoing President Jim George, and Secretary Debbie George, were also recognised for their total commitment to the club with a plaque placed in their honour. The members and supporters plus the local community owe them a huge vote of appreciation.