Home  »  Things to See and Do   »   A chance for dance – who would like classes in Rainbow Beach? 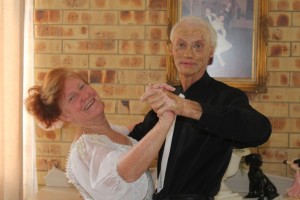 They met in the late 60’s in dancing and they married in 1973. In 1980, they turned professional and started their own studio in the Valley in Brisbane.

They have run Sunday Afternoon Tea Dances in Woodridge and started dance classes in Logan with 150 people on a Friday afternoon.

John worked as a sheet metal worker and would come home and go off to the studio to teach every night of the week. They have participated in festivals all over Brisbane, done demonstrations in NSW and even been on TV with Harry Brookes who said they were the QLD professional top dancer champions at the time.

They have won many competitions over a period of 15 years, from beginners to an Oscar, which is the top award. They have all their qualifications in Modern, Latin and New Vogue. Margaret teaches alongside John and has also been judge on many occasions over the years. John also does inventive dance where he creates dances and then teaches them, one is called “The Waltz Paree”.

John and Margaret moved to Tin Can Bay about 16 years ago to improve Margaret’s asthma then six years ago she was also diagnosed with breast cancer. Not wanting to go the conventional way she ventured on an all-natural cure and is still here with us dancing to her hearts content.

Margaret says, “Dancing in the last 6 years is the one thing that has kept me sane, dancing with my John. It’s a good life, it’s a love affair with dancing that we’ve always had”.

They love dancing but they are passionate about teaching.

“It’s what we want to do, we can go dancing and we do that every month, and we’re doing that for ourselves, but the love of dancing and the teaching part never goes out of you, it’s always there,” Margaret explains.

John agrees, “We know so much and we want to give that to other people too, so they can benefit from it”.

John and Margaret started teaching here in Tin Can Bay in 2010 in the RSL Hall, following that they taught in Gympie for a while.

Now they are keen to bring dancing to the area again at the Community Hall in Rainbow Beach. John said, “If you’ve got 2 legs and you give yourself time, anyone can learn to dance”.

There will be a meeting on Tuesday, June 9, 10.30am in the Rainbow Beach Community Hall to find if there is any interest out there. For further details contact John or Margaret on 5486 4434.