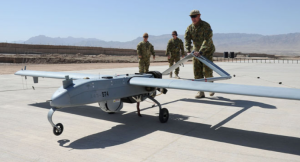 The Shadow TUAS being retrieved by army personnel after another successful flight.

As usual, there will be many model planes from all over Queensland, as far north as Barcaldine and south to the Gold Coast, at the Tin Can Bay Model Flying Club’s Warbirds to be held on April 29 and 30.

A special feature this year will be a static display by the ADF (Australian Defence Force) of their Shadow 200 TUAS (Tactical Unmanned Aircraft System), more popularly known as a drone. This system was used extensively in Afghanistan.

The complete system, four aircraft, launcher, ground control station and associated spares and other equipment, was valued at $15.5 million in 2011. Individual aircraft are worth $750,000 each and it is believed the camera, a very high definition unit, is worth about $1 million.

It is believed the launching system will also be displayed, but probably not the ground control station. 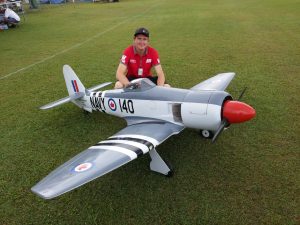 Aaron Garle with his Seafury at last years Warbirds

The event will be held at the club’s field on Kidd Straight, and the public will be catered for with a full canteen operating both days, and admission is by gold coin donation.

Update: The ADF Shadow 200 TUAS will not be at the event due to ADF staff member illness.