They may have been a day late celebrating Australia Day, but the delay did nothing to dampen the enthusiasm of the members and friends of Tin Can Bay Yacht Club. Together with affiliate clubs, Cooloola Dragon Boat Club and Sailability Tin Can Bay, over sixty people gathered at the yacht club in true Aussie style to contest the Annual Australia Day Challenge. 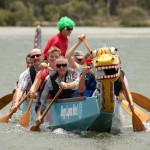 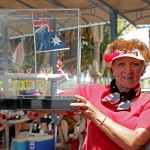 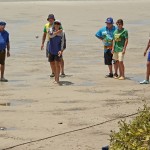 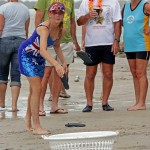 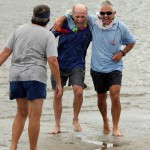 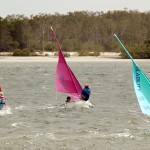 First held in 2009, the Challenge consists of a series of typical Aussie fun events based on the water and the beach, with the winner taking home the prestigious Olive Dish Trophy. Events included sailing races in Access 303 dinghies, time trials in the dragon boat, a tag team relay in kayaks, hotly contested beach boules and thong throwing competitions, and recitals by members of original Aussie poetry compositions.

Competition was fierce and amid much fun, frivolity and more than a smattering of skulduggery and unfair sportsmanship, the scoreboard recorded a three-way tie after all the fun and games concluded. Organisers resorted to a Sudden Death Australiana Quiz to decide the winner, which saw the Sailability team secure the win and the trophy.

Prizes were also awarded for the best male and female outfits and there were a number of novelty activities including trying to ride a “knobbled” bicycle and guessing the number of gumnuts in a jar. Proceeds from the day were donated to Prostate Cancer Research in memory of Sailability President Barry Ryan, who recently passed away.

The Australia Day Challenge will be held again in 2015 – put in on your calendar. It’s a day not to be missed!

Kayak Kaos: It came down to a beach sprint in the Kayak Relay. The Yacht Club’s John Grimmett (right) tries to hold back Sailability’s Alan Jones while the Dragon Boat Club’s Gayle Barnett runs interference on both. The Yachties won!

Winners are grinners: Sailability’s Sue Nugent accepts the Olive Dish Trophy, telling all present that “this one’s for you, Barry!” in memory of Sailability President Barry Ryan