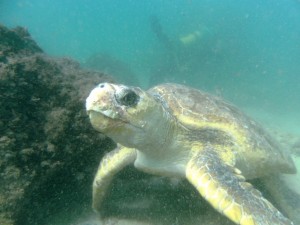 January and February are Grey Nurse Shark Survey months. These surveys are done by volunteers at any sites where grey nurse sharks are found up and down the NSW coast and as far north as Wolf Rock here in Rainbow Beach.

Volunteers provide a range of information such as how many sharks they have seen, what depth they were seen, water temperature and several other pieces of information. The most important thing however is photos that can be used to identify individual sharks.

This research is used to provide an accurate account of how many grey nurse sharks make up the Eastern Australian population and their movement patterns.

January is the month when we start to see the greatest numbers of GNS. At present we are seeing in the vicinity of between 20-30 sharks at Wolf Rock, all females and all here for their gestation period.

In the next few months we will start to see the early signs of pregnancy.

Other animals we have been seeing at Wolf Rock this month include squadrons of eagle rays, whaler sharks, manta rays, turtles, leopard sharks and much more.

Water temperature is 25 degrees and visibility has averaged 15 metres.