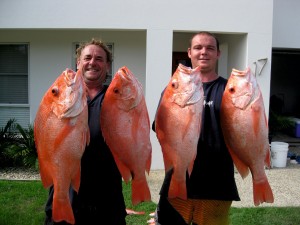 Ed and Brandan with some cracker scarlet perch

Keely Rose Fishing Charters owner, Ed Falconer has been surprised with the catches last month. Typically, February is very quiet on the fishing front, but 2014 has been different. Even when weather conditions were poor, there were still catches on the beach and bay.

Ed commented on facebook, “Cannot remember such good weather through February – for quite a while anyway. The fishing is brilliant when you are only a couple of miles offshore and land this sort of quality. Top shelf!”

Ron Pheeney from the Sunshine Coast with a “thumpin’ reddy”

“Headed offshore on charter today – another glamour day on the water. Had a hot bite on the dolly’s this morning with them smashing lures left, right and centre. Total mayhem – the boys were having a ball and bagged out in under an hour. Picked up a good mix of reef fish throughout the remainder of the day.”

Greg Pearce from Double Island Point Fishing Charters has also reported excellent catches online last month, “Started on the Spanish this morning and left them biting with seven in fifteen minutes! Then we jumped out a bit wider and found some nice reefies including a few cracking Red Emperor.”

There’s been some good whiting caught on the beach – Ella Falconer was very pleased with her after school effort.

When conditions offshore from Double Island Point were too rough to fish, they still found plenty, “With a crew keen to wet a line we fished in the shelter of the Bay, entertained ourselves with a reasonable catch of Sweetlip and a few other mixed reefies.”

He even posted a 80-100kg black marlin,  “caught and released by Rainbow local Pat Fennessy while chasing Spotties in a 4m tinny. It was caught on a pilchard and a Wilson Live fibre 6-8kg spin rod, penn reel and 30lb braid. He was absolutely stoked and who wouldn’t be!”