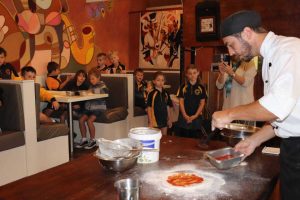 The excited grade 2 and 3 class enjoyed Michael’s talk about the ingredients that go into the dough.

“We started the dough-making process two days ago,” explained Michael.

The children were given a sprinkling of flour on their table and balls of dough were handed out. Carefully concentrating, the children copied Michael to transform the balls into flat circles.

“The next step is sauce,” said Michael,

“We make our tomato sauce ourselves, the tomatoes are from Gympie and we buy them direct from farmers so they are tasty, ripe and cheap,” he continued.

“In supermarkets, they are grown around Australia and they have to ship them so it takes a while, buying direct from farms is better and fresher.”

Shona Hall, whose parents own Arcobaleno, said, “They source as much produce as they can from locals:  mushrooms from Gympie, ham from Maryborough, some cheese from Kenilworth, Cooloola Milk and in summertime, lettuce and rocket from Goomboorian.”

Some of the children were interested to know how the menus were created and they talked about how important flavours, smells, customer opinions and research were.

When asked if they create desserts, Shona smiled, “We have a special pizza that contains nutella and is served with strawberries, bananas and ice-cream and when it’s folded over, it’s called a Calzone.”

And what did the kids think of their own creations?

“I hated pizza before because I had only eaten frozen ones, but now I’ve made one at Arco’s with yummy toppings, pizza is my new favourite food!” said Jake from grade 3.

Arcobaleno’s on the Beach is a family-run business, owned by Tania and Tony. Son Kingsley works in the kitchen and Tania bakes the delicious cakes and slices.

Arcobaleno’s also has a reputation for having great coffee, “It’s rare to get Australian coffee but ours is from D’Aguilar, located inland between the Sunshine Coast and Brisbane and it is made without chemicals,” Shona Hall explained.

The business has a history of generously supporting the Rainbow Beach State School where four of Tony’s grandchildren attend.

Over the years, the family has assisted with breakfast club, catering, tuckshop and prize donations for P&C fundraising events.