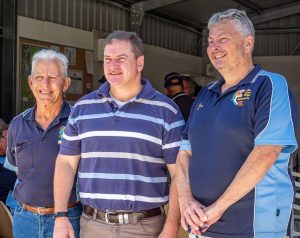 Llew O’Brien MP was thanked by members of the TCB Fishing Club for the funding grant received for $40,000 He is pictured with President Jon Constable on the right and retiring member Jim George

The Tin Can Bay Fishing Club Executive Committee and members extended a very big welcome to Mr Llew O’Brien MP during his recent visit to our club.

The occasion was to celebrate a funding grant received from the Australian Government for $40,000 that will be used to improve and upgrade the Club’s building and facilities for its 127 members and will include landscaping and garden improvements.

The funding was made available under the Federal Community Development Grants Programme which is administered by the Department of Infrastructure, Transport, Cities and Regional Development.

Club President, Jon Constable, thanked Mr Llew O’Brien MP, Member for Wide Bay for the consistent support that he provides to our organisation, as well as assisting our local community and other community volunteer groups.

Jon also asked Mr O’Brien to pass on our thanks and appreciation to the Deputy Prime Minister, Mr Michael McCormack MP, and the Australian Government for the assistance that has been provided to our organisation.

The Club’s Annual General meeting was held on Wednesday, October 16 during which the financial report was delivered to members. Club members have elected Jon Constable as President together with the new Executive and Committee for 2019-2020. The club now has 126 members and is enjoying steady growth.

Members have recently reported small numbers of summer whiting have been taken at Kauri Creek and in parts of the Tin Can Bay Inlet. Best results have been obtained when fishing the shallows on a rising tide and using yabbies.

There have been some good catches of flathead in the Tin Can Bay Inlet as well as Teebah and Kauri Creek. Fishing early mornings during the runout tide has produced the best results.

The weather has limited the opportunities for beach fishing last month and small catches of tailor and whiting have been taken at Inskip Point during the run out. With the weather warming up, Mangrove Jack will be appearing in the creeks and amongst the mangroves soon.

Ed Note: A very big thanks to Jim George, who after many years of service will be retiring from the TCB Fishing Club Committee. Thanks Jim for your wonderful submissions to our paper. All the best.