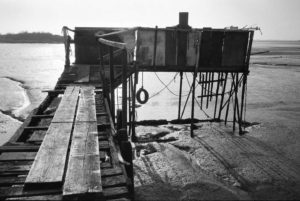 Many locals are crying out for a jetty in Tin Can Bay, and whilst Bullock Point receives an upgrade, there are no plans in place for a public jetty there either. Our popular guest writer and history enthusiast, Ian Ross takes us back to Carlo Creek Jetty and adventures of our early beach fishermen…

I have written on earlier occasions about my early visits to Rainbow Beach which began in 1960 but there were, of course, much earlier visitors.

We know there was occupation at Inskip Point 100 years earlier when a pilot station was established there to guide ships entering the port of Maryborough over the wide bay bar.

The lighthouse at Double Island Point was built in 1884 and there was communication between the families at both locations by horseback or horse and buggy.

When did the beach fishermen who are so common today first arrive?

An interview some years ago with Gympie man Jack Cornes answered many of my queries. Jack was the Funeral Director in Gympie and an avid fisherman and, when time permitted between funerals, he would escape to Tin Can Bay where I believe he owned or had an interest in a beach house and motor boat.

Jack told me a story about his many trips to the back beach as Rainbow Beach was then known. These adventures would have occurred in the mid to late 1930s.

The trip started by motor boat at Tin Can Bay and crossed the Tin Can Inlet into Carlo Creek on the other side. Not a great distance but still about an hour’s journey in the put put type motor boats that existed in the 1930s.

A lot of effort from Tin Can Bay locals had been put into building a jetty at Carlo Creek. It didn’t reach the deep water below low tide mark but finished somewhere about the half tide mark.

On the shore beyond the jetty was a collection of old vehicles from the 1920s. They had been floated from Tin Can Bay on rafts made from 44 gallon drums. These keen locals had also cleared a winding path between the trees across the swamp and on to the surfing beach beyond.

To carry on with Jack s story: trips to the back beach were dependent on tides and a low tide around midday was desirable. The boat would arrive at the Jetty around 10am when there was still sufficient water to tie it up and secure it for the beaching at low tide. It was then across the jetty to the waiting jalopies.

Apparently there were several, some in roughly made sheds, others left in the open.  I believe the vehicle Jack described that he travelled in was probably a 1928 Ford Model A Roadster.

The beauty of these vehicles was they were light, having wooden floors, no heavy glass other than the windscreen and a canvas roof.

Twenty-one inch wheels meant they had considerable ground clearance to traverse the sand track. They had a crank handle to start the engine so it didn’t matter if the battery was flat.

Jack told me they probably arrived at the Back Beach around 11am and fished for about 3 hours, starting the return journey about 2pm.

After securing the vehicle on the bank near the jetty they would proceed back to the boat now floating again at half tide and resume the return to Tin Can Bay. If the beach fishing had not been the best, they would try their luck again in the holes along Carlo Creek.

Jack also told me the adventures to the Back Beach were weather dependent. After heavy summer rain, the swamp land along the track behind Carlo Creek became flooded and impassable.

During the years that followed World War II, the jetty at Carlo Creek fell into disuse. The military had updated many of the forest tracks during the war and, with renewed logging after the war, the Forestry Department continued to maintain them.

Four wheel drive vehicles were now available and able to traverse tracks around the Tin Can Inlet. The jetty at Carlo eventually fell apart.

What remained was destroyed when the present boat ramp and car park were built. However, if you care to explore the sand flats alongside the channel leading to the boat ramp, you may see a line of stumps in the sand which were the pylons of the Carlo Creek Jetty.