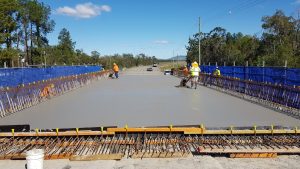 Recent photo of the Deck Span on the Coondoo Bridge due to be completed by the end of the year. Photo:Department of Transport and Main Roads

Here is the latest on the Coondoo Bridge progress, as lots of people have been asking what stage they are at.

“The $14.8 million project will replace the existing, 60-year-old timber bridge with a wider, three-span, concrete one.

“The new bridge will increase safety and connectivity for road users by improving flood immunity and reducing closures due to flooding, as well as reducing ongoing maintenance costs.

“We are building it on an improved road alignment to the west of the existing bridge, minimising disruption to road users while works are underway.

“Works were temporarily stopped after significant rain in February this year, but the project remains on track and road users can expect to start using the new bridge later this year, weather permitting.

“We recently transported 15 girders each weighing 82 tonnes to the site to support the deck.

“The major structural components are now complete, and the concrete deck is under construction.

“Once the deck is finished, we will start work on the road approaches and bridge barriers before finalising the project.