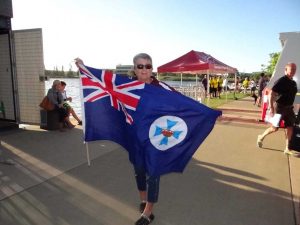 Gayle said “I was lucky enough to pen my own eulogy” which relieved some of the burden of loved ones. Always thinking of others.

In the last month of her life she actually took pleasure in reliving her life’s story and achievements. Like any of us she had some bumpy detours along the way, but dealt with them and moved on.

Gayle grew up in Victoria with a close knit family and friends. Camping at the beach at Anglesea, playing cricket in the sand and just being an outdoor kid. Her education began at Burwood East Primary and ended at Burwood Teachers College, complete with a Bachelor of Education – Primary.

She loved sports and was a staunch supporter of the Richmond Tigers. She loved to play footy with her sister Judy and brother Loz (as she called him) and the boys on the block, much to the horror of mum Jean.

At college she revelled in Karate Do, the ancient Okinawan style of Wado Ryu Karate – and was invited to Japan to train in the notorious Nichi Dai dojo at Tokyo’s Nihon University. She was the only female ever to have trained in that dojo. Quite an accomplishment.

After a short stint in teaching, she took on a life-changing journey to sail on the “Ilinga“, a 45-footer, as a companion and teacher to a five-year-old. Not long after she joined on another sailing vessel for a little cruising and an adventure in real sailing.

While she was cruising she met Alan Schneider and teamed with him as a deckhand / cook-come-hostess on a charter vessel, which later led to her being involved in commercial fishing with Alan for over 20 years.

The move to Tin Can Bay was prompted by an extremely sad time with her sister Judy’s relapse of breast cancer. She wanted to be closer to Brisbane.

She and Alan ventured into Tin Can Bay and lived on board their fishing boat before settling at Cooloola Cove. She noticed the yellow dragon boat making it’s way up Snapper Creek and vowed to join in this activity.

Since 2004, Gayle had been involved with the Cooloola Dragon Boat Club in a number of roles, and was revered in the Dragon boat fraternity of Queensland. She was chosen to accompany the Currumbin Dragons to the World Club Championships in Canada as a sweep.

She also represented Queensland and carried our flag at the National Championships opening ceremony at Kawana in 2014. Her achievement in the creation of the “Wide Bay Series Regattas” was a feather in her cap.

The Wide Bay series, involving Hervey Bay, Bundaberg and 1770  is a real testament to her dedication to Dragon Boating.

Being an adventurer, Gayle and a few other Dragon Boaters trekked in Nepal. She loved Nepal, the people and their spiritual connection with nature and the mountains.

She would have liked to have gone back to help after the devastating earthquake but that was not possible so the Club did the next best thing and raised money for the Nepalese people at a charity function at the Yacht Club.

Gayle touched everyone with her honest, fun-loving and caring nature and the Nepalese Porters called her “Aunty”. A mark of respect.

Gayle will be sadly missed, but her memory will not be forgotten.