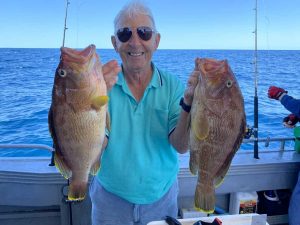 Shortly after Father’s Day, the loud early-morning and late-afternoon back-and-forth conversations from our recently arrived overseas travellers have been hard to ignore!

For those who haven’t guessed, the new arrivals are the storm birds (Eastern Koel) arriving back from their winter holiday in New Guinea and Indonesia.

The arrival of the storm birds signals that the summer whiting are schooled up, spawning and feeding aggressively, especially on well-presented yabbies. Good numbers of quality whiting in the mid thirty-centimetre range have been caught recently and should remain in a feeding mood for a few weeks before they spread out again.

With the arrival of the warmer weather, it is also time to check that your tackle is all in good order; ready to do battle with the voracious Mangrove Jack which begin to get active in the creeks this time of year.

A live diver whiting, or fresh flesh-bait should result in an aggressive tussle with a lot of loudly delivered expletives, as the fish attempt to “brick” the ill-prepared angler in a cluster of mangrove roots.

Flathead are a bit patchy but are still worth targeting with a variety of lure types and if the flatties are a bit slow it could be worth a troll along the drop offs as there have been a few good-sized golden trevally and the occasional tailor recently caught.

Squid seem to be a bit hit-and-miss lately, but don’t give up hope, as last year there were good numbers being caught later into the year and I firmly believe that local squid are the best bait for fishing the outside reefs. 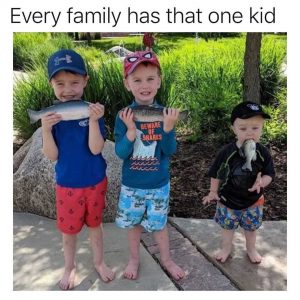 Fishing…it just brings out the kid in all of us.

A recent trip on Keely Rose brought home some big pearl perch, snapper and cobia – caught on local squid. Of course, other bait will catch fish if you’re in the right area, but consistently the local ones perform outstandingly.

The bay reefs have been a bit quiet lately but still have produced a few quality cod and tusk fish for those who persevere and try the reefs on the periods of slack water on the tide changes.

On the lighter side of life, here’s a snap which will surely produce a smile or chuckle…