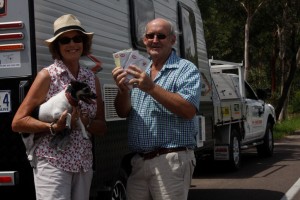 Contrary to what many think, don’t believe all you hear on radio or see on TV, there is still a huge area out West that has had no rain.

Tony and Rosie Stewart are just back from Longreach after delivering the third load of food and vouchers to those still affected by drought.

“For those that got good rain around Longreach, their dams are full, but not much grass has germinated, it is mainly weeds. Anyone that thinks the drought is over, hop in the car or look at the pics,” said Tony. 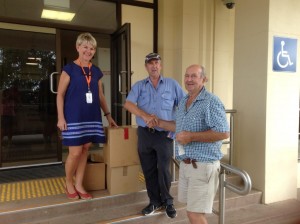 Drought Angels are turning over hundreds of thousands of dollars in aid – this is part of a consignment picked up from them in Chinchilla for Longreach Hospital. Part of the consignment was also delivered to Ilfracombe ready to feed the drivers on the next Hay Run.

“Hearing from people – it is heartbreaking. After four years of drought – it is not bad management, it just hasn’t rained. Some people we visited had no power, no hot water – and you can see where a lot of stock have perished with the ‘roos.”

Many thanks to those businesses in Rainbow and Tin Can that helped with donation tins.

“These tins collected $1000, and with a $400 donation from IGA Tin Can Bay, we were able to deliver this amount in IGA food vouchers to be redeemed by the needy at Longreach IGA.”

Many thanks to Matt, Bernie and family for their ongoing contribution in Drought Aid. 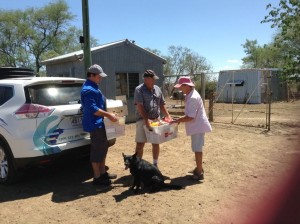 Handing over supplies to Jennifer McKay 60kms west of Longreach. They have been on a 60,000 acre family-owned property for 103 years. This is the first time this family has apparently asked for help. It was hard, they battle on and on – and still about 8000 sheep. As you can see they missed the rain.

To the Surf Club, your contribution of $300 in produce was much appreciated also. Tin Can Bay Lions another big box of Christmas cakes, thank you.

We applaud Marilyn Dean and her wonderful ladies for the contribution of four boxes of toiletries. To Renee and Simon many thanks for goods and passing around the hat on Australia Day at the Rainbow Beach Hotel.

Well done to Arthur at Tin Can Bay Bakery baked about 1000 Anzacs, with little help from me. Patty Watts and Marg Christiensen, they sent some great cakes on the last load. 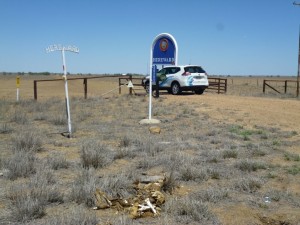 The land is still crying out for rain

“We could not take all the goods promised on the last trip as we had to pick up at Chinchilla. More supplies for the next Hay run to Ilfracombe on April 1 and also baby needs for the Longreach Hospital.

“Rosie and me hardly fit in the caravan – boxes were everywhere!” 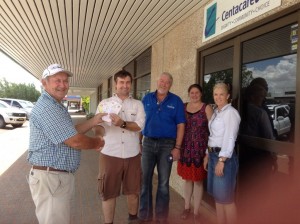 $1500 of IGA Vouchers go to the Centacare team

And they are going to do this again.  Anyone wanting to donate to the next Drought Aid run please call Tony Stewart on 0408767930.  Registered via CentaCare or the Drought Angels at Chinchilla on 0402248974 (Tasha) so receipts are available.