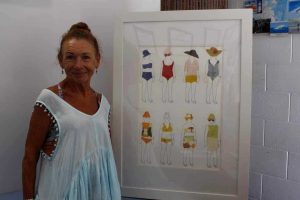 Each day, a familiar sight in Rainbow Beach comes in the colourfully dressed form of Yvonne Connelly, who burns a track on the pavement and even inspired an artwork at the Artyball! Trish Torenbeek caught up with Yvonne to find out how she came to Rainbow Beach, and why she is compelled to walk.

Yvonne Connelly – otherwise referred to as ‘The Walking Lady’ came to town on a house-sitting mission about four years ago. She had lived in the region for a few years prior, looking after residences in Tin Can Bay and Cooloola Cove, so when a property became available in Rainbow Beach, she was very happy to take it on.

Yvonne discovered our beautiful town and fell in love with it many years ago when she’d moved from the NSW Central Coast to Widgee.

Born in Ryde, Sydney in 1951, Yvonne spent her childhood in the big city where her parents owned and operated an auto electrical business. Sadly her father passed away when she was eight years old, but her mother continued to run the office and staff.

After leaving school at age 17, Yvonne took over the management of the business as she was interested in the work.

“I had to shrink a pair of overalls to fit me,” states Yvonne. “It was a very unusual situation to have a girl working in a man’s environment back then.”

Her family owned real estate in Empire Bay and in 1977, when Yvonne was 26, she invested in the property and lived there for around 20 years. During that time, she travelled overseas with her mother and rather than catching the local transport or hiring vehicles, they would sight-see on foot, covering many kilometres daily.

“It’s in our blood on my mum’s side,” says Yvonne. “We go back at least 3 generations, in fact my grandmother, Ethel Bell, was also dubbed ‘The Walking Lady’ as she was a regular sight around Cabramatta many years ago.”

Married in her thirties, she became a mum to Jannah and Ryan, who now have families of their own. In 2008, Yvonne started a new chapter in her life as a single lady once again.

Seven days a week we see our walking lady out and about, gracing the footpath, beach and the bush tracks to fulfil her goal of an average of 25 kilometres.

“Some days I only do 10 kilometres, depending on the conditions, but I’ve reached 50 kilometres on many occasions. My favourite spots are the beach, so I can cool off by putting my feet in the water, and the tracks through the bushland.”

On one occasion, without warning, she came across a large black snake on the path, but as she was at full speed she had to leap right over it!

“I had no idea I could jump so high,” laughs Yvonne, “It was like I had grown wings.”

One other instance saw her saved by a split-second decision, as on an incredibly gusty day a large tree limb fell on the path behind her.

“I was about to turn back but I made a quick decision to keep going, then suddenly the limb came crashing down. I was so fortunate, it could have been a terrible outcome – I felt looked after that day.”

Yvonne has travellers asking her for directions often when she’s on the move, plus some crazy questions which mostly make her laugh, like how many outfits does she have? In answer to that, it’s between 40 and 50.

Swimsuits and practical gym wear is her preference, as it keeps her cool and dry. Recently, an activewear pop-up shop benefitted handsomely from Yvonne’s interest! She also dons some very stylish hats and has a collection of around a dozen.

On most mornings, Yvonne sets out with a plan of where she will explore, but it often doesn’t end up that way…

“I get into a zone like a meditation and I process memories or clear my mind of daily life, sometimes people say hello but I don’t always hear them and they think I’m rude!”

Having sight issues has been a problem too, however recent eye surgery has improved that situation.

The 2019 ARTYBall in on again in October, but you can also enjoy an ARTYFestival in July!

The community hall will showcase local art and craft through exhibits, demonstrations, classes and workshops, as a promotion of the talents of Rainbow Beach.

So, to all you authors, painters, printers, sculptors, fabric artists and more, the invitation is on to be a part of this spectacular and show your wares. Get in touch with Leonie on 0407 529 624 or at jayleonie@bigpond.com.

Sometimes you will see Yvonne with a couple of furry companions, she is happy to have the company of her friends’ dogs as she walks.

She also appreciates the fact that people like to stop and talk as she powers along: “This is a lovely town with so many lovely people, thank you to everyone who gives me a wave.”

Local artist Leonie Kent found Yvonne’s world intriguing and delivered a simple but beautiful representation of her at last year’s Artyball which proved to be extremely popular. The Gilmores won the auction bid on the night and proudly hang the painting in the Reception at Rainbow Getaway Apartments.

Leonie is not alone in her talent as an artist, as Yvonne reveals she too loves to draw. “I may enter something in this year’s event” she teases. “If not, I’ll be up on the dancefloor anyway!”

Yvonne’s other interests are food and cooking, “I love seafood, teamed with a crisp beverage, in fact my three favourite W’s are Walking, Water and Wine!”