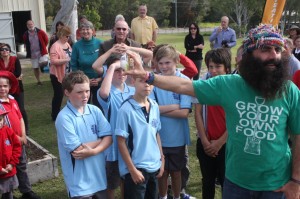 “Like a bum and a pair of undies – they go together….”

…Costa Georgiadis from ABC’s Gardening Australia explained to Grade 6 students the importance of chooks and gardens at the official opening of the Tin Can Bay P-10 State School kitchen garden.

Surrounded by community members, Men’s Shed, CTC’s Work for the Dole scheme and school leaders, Costa engaged the children and adults by his physicality and dynamic performance. Pretending to jump from a picnic table into the celebratory cake and demonstrating how a cucumber grows by splaying himself on the ground, he sustained the attention of all ages.

Describing the pop when you bite into a fresh bean, or creating omelettes from your own chooks’ eggs, his audience felt his undeniable passion for fresh produce.

Garden co-ordinator Chappy Ronnie was thrilled to have Costa visit and said, “Costa’s aunt Debbie George lives in Tin Can Bay and has been keeping him up–to-date with the progress of the garden since it was resurrected late last year.”

“Both Tin Can Bay and Rainbow Beach schools are part of the Stephanie Alexander Kitchen Garden Foundation which provides schools across Australia with the tools to link kitchen garden classes with subjects such as maths, history, geography, technology and learning about the environment.”

His uncle, Jim George said, “Sailability had invited the Garden Club to Costa’s morning tea and it was standing room only! Over 100 people attended and the proceeds of his talk and an auction netted Sailability over $800. It was terrific!”

Costa’s passion for growing your own food fits in perfectly with the school garden program, where kids also learn to cook what they grow.

Chappy Ronnie says students will be involved in a weekly garden class under the supervision of volunteers led by Lindsay Fewster and Ian Webb. Kitchen sessions will start later this month.

CTC Employment has commenced a six month Work for the Dole project, under the supervision of Ian Webb. This team of unemployed Tin Can Bay residents will take it to a whole new level, with the hope that the garden will eventually become self-sufficient.

Chappy Ronnie said, “This term at Rainbow Beach School we are planning on having volunteers working in the kitchen garden each Tuesday with a view to involving students from various grades as the term progresses.”

“The garden is growing well and we will be having another working bee to place and plant more raised garden beds. Please keep donations for the garden and the kitchen coming in!”

Meanwhile at Tin Can Bay, Digger Seeds have donated heirloom seeds and Costa has requested students take photos and keep him informed of the progress.

As Costa said, the opening was a celebration.

But that is not what the kids said. I overheard one fellow say to his schoolmate, “This guy’s funny!”

What a wonderful advocate – encouraging the next generation to think about their food and know that it’s fresh. It bodes well for the future of Tin Can Bay’s school garden.