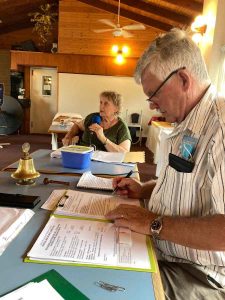 Last General Meeting for Daryl Christie as President and Cherryl Mossman as Treasurer.

A morning tea in February was a chance for members and some visitors to catch up on each other’s news from over the holiday season, but the first formal meeting for the year was in March with a happy group enjoying being together again. The AGM followed a General Meeting and afternoon tea.

The annual Changeover Luncheon takes place at the end of March, with a presentation of skits and other items to entertain attendees and the new team begins their duties on 1 April.

The Annual Ecumenical Service and Blessing of the Club Presidents’ Collars, followed by a morning tea, will take place on 11 April after its earlier postponement from February. This is a chance for Probus members from the whole Wide Bay area to catch up and meet more members of other clubs from Bundaberg down to here. They also meet for a concert which is held later in the year.

Meetings are held on each second Monday of the month at 2.00pm at the Sandcastle Motel in Tin Can Bay and include a break for afternoon tea and a chat. For more details please contact our Secretary Katrina on 0407 637 691 or cooloolaprobus@gmail.com