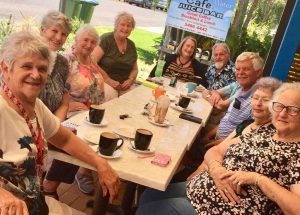 The President of the Probus Club, Arthur Leggo, laid a wreath at the Remembrance Service in Tin Can Bay last month and a few days earlier Arthur had taken a medallion and certificate to our meeting.

He explained that these were issued to celebrate the end of the Second World War and recently awarded to veterans like him who are still alive.

Members enjoyed a coffee morning at Temptations at Crab Creek and the “Music in the Park” concert in Tin Can Bay, and a group will attend Morning Melodies at the Brolga Theatre on December 3.

The lack of a leash-free area for dogs in our community was discussed and we have written to the Gympie Regional Council suggesting a facility be built. It was noted that all dogs are now charged a registration fee by Council.

As a closer to our meeting, Graham spoke of the mobile phone number 112. This is an alternative to calling Triple Zero on your mobile phone in times of urgency if you have no reception for that number.

The Cooloola Coast Probus Club meets in the Sandcastle Motel in Tin Can Bay at 2pm on the  second Monday of each month and welcomes new members. Contact Arthur 07-5486 4581 or Katrina at cooloolaprobus@gmail.com