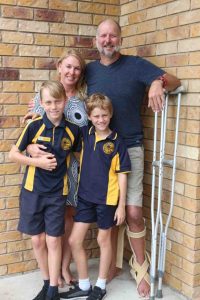 At 7.30am on the last weekend of the school holidays, the steering on Rob Gough’s Ice Truck failed just before the Freshwater track, and he ran off the road and hit a gum tree.

He thought he was dead.

Miraculously, he survived, but was pinned in the cab unable to move and every part of his body was in agony.

First on the scene was a doctor, then colleagues, friends, acquaintances and people he had never met, all there to help him.

“It makes you realise how quickly your life can change,” he said.

“I was and still am a very lucky man to be still here and more importantly, not to have involved any other person.

“It was the busiest day since Covid, a long weekend,and we had five trucks going out and the road was really busy and when I realised the steering had gone I just thought, I’m dead, I hope the truck goes left into the bush so no one else is hurt.

“We dislike using the main road to get to the Freshwater Track then over to Teewah as our trucks are full to the brim and everything gets knocked around, but we just couldn’t get up the beach that morning with the tide so high.

“Mick Elmer was in the other truck waiting for me at the entrance to the Freshwater Road and someone driving past went back to him and said ‘your mate has had an accident up the road’.”

Captain of the local Fire Unit, Liam O’Connell, local policeman Mick Emery along with Jack Dean who ironically used to drive that truck were also on the scene straight away to help.

“I was screaming in pain, Jack said, ‘what can I do for you’ and I said ‘just get me out of here!’

“So he grabbed an axe and moved the tree, and I said, ‘somethings holding my foot in here’. Jack said, ‘it’s probably going to hurt’ but he ripped the clutch, brake and accelerator out from under my feet which released the pressure on my hip and then the pain was manageable.

“Then I was passing out all my stock, newspapers, etc., from the front seat and he said: ‘Well mate, you are probably the luckiest person alive’.

“Wife Martine got the call as soon as it happened and notified the emergency services and was there in ten minutes. Once she knew I was alive she switched into work mode.

“My dad, John Nolan, was also here helping us for holidays. He was loading another truck at the shed, getting ready to go over to Teewah.

“So, change of plan, and he had to bring that truck out to the accident side so we could unload all my stock into his truck, so we didn’t suffer stock losses as well.

“It was like a production line! Everyone was helping unload all the ice, wood, ice creams, etc. Funny thing is I didn’t break an egg!.

“Thanks to Liam and local emergency services who were all awesome professionals and swift acting.

“The ambulance took me to Gympie and we had to stop five times for the pain – it’s a terrible road but in an ambulance it is a nightmare.”

Rob was taken to Gympie Hospital where his dislocated hip was put back in and then moved onto the Sunshine Coast University Hospital (SCUH) where they looked after his shattered pelvis and leg.

“Because we have a pretty big facebook following with The Ice Man, when I arrived at SCUH, there was a male nurse about 6ft tall and he said,” I’ve been expecting you, Freeze”.

Two months later Rob’s hip is healing well, though he has some issues from the knee to the foot and the long-term prognosis is not known. He is waiting on more X-rays and CT scans, but it will be impossible for him to drive the Ice Truck until next March at the earliest.

He is now able to zip around in a scooter given to him by the ‘brains trust’ of Rainbow, kind business owners from the Industrial Estate, which he said has given him some freedom and the ability to get around has helped his mental health.

“The support in this town has been unbelievable from the minute the ambulance arrived to now.

“Rainbow Beach is certainly nothing like I ever expected and the support they gave Martine, she is the hero. She has had to look after the boys, the business and a broken man.

“We have the best job in the world, but there is so much behind the scenes to get those trucks on the road and we are so grateful for all the help.

“There is no way I can thank everyone for all they did for me.”

He said, “We are looking forward to camping numbers opening up and a fruitful Christmas.”