World Ranger Day is celebrated annually to commemorate Rangers killed or injured in the line of duty and to celebrate the work Rangers do to  protect the planet’s natural treasures and cultural heritage. Each year a Ranger Roll of Honour is released in memory of the  rangers that died in the line of duty. In 2020, over 151 Rangers died worldwide, through animal attack, drowning, motor vehicle accident, homicide from poachers, and firefighting. This included conservation areas in India, Zimbabwe, Thailand,  USA, and Brazil. In the DC Congo, where rangers work to protect the endangered Gorilla population, over 15 Rangers died in  2020 whilst protecting the animals from poachers. In Australia, during the same year, we lost three rangers through  firefighting, vehicle accident and shark attack.

On 31 July let us pause for a moment to reflect on the courage and sacrifice that Rangers make by honouring Fallen Rangers  and standing with Rangers who bravely undertake their role on the frontline.

What do Rangers do?

The roles and responsibilities of Park Rangers are  very diverse and include management of terrestrial,  marine and island parks; fire; wildlife; and visitor  safety. Rangers working in Cooloola, face daily  pressures of managing a conservation area which  receives the highest visitation in Queensland. 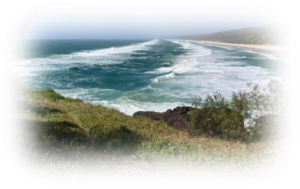 It is very rare for any two days to be the same for a Park Ranger. The work can be unpredictable and often influenced by weather. One day you might be  protecting heritage values or focused on conserving  and managing natural resources by working on a  planned burn, or by running weed and feral animal  control programs. The next day you might be  patrolling parks and upkeeping visitors’ facilities talking to park visitors, cleaning facilities, and  making repairs to walking tracks.

Passions of a Ranger

As a child I spent much of my days exploring. My parents were a huge inspiration for anything outdoors and my grade six teacher taught me all things National Geographic, introducing me to shorebirds, gorillas, chimpanzees and Jane Goodall. I was hooked! I never thought I would be able to become a ranger-I just wanted to make a difference somehow. Everyone can make a difference by leaving no trace when they enter and leave a conservation area and helping to minimise their footprint on the planet.
Heres’ what motivates some Rangers based in the Cooloola Recreation Area: