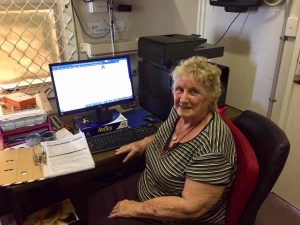 As the fading notes of the Last Post linger in the morning air, Cherryl eases from ‘attention’ to ‘at ease’ –  another Anzac Day is well underway.

Cherryl commenced her career with the Australian Defence Force in 1962 as a 17-year-old.  She had tried to enlist six months earlier, drawn by stories of her father’s Army service in World War 2, but at the last minute the recruiting officer realised her age and she was forced to wait for her next birthday to join up.

Cherryl’s career with the Women’s Royal Australian Army Corps continued from 1962 until she reached the position of Acting Warrant Officer Class 2 in 1977.

Through her career she worked with Recruit Training Corps, Armoured Corp, Military Police, and Military Hospital as Pay Sergeant before her final position as Chief Clerk, One Military District. She was posted to numerous centres including Kapooka, Puckapunyal, Manly, Yeronga, and Balcombe.

Asked what she enjoyed most about her Army service, Cherryl said, ‘I loved – in fact, was addicted to – the work – the togetherness of working and socialising with people from all walks of life. I was totally supported by the male members of the Defence Force and always felt respected, never threatened.’

‘It is all about perpetuating Anzac Day traditions to the young and community in general, without glorifying war. I love the camaraderie and bonding of Defence Force employees that continues through to today through involvement with the RSL and Anzac Day ceremonies.’

Cherryl is the current Assistant Secretary of the Tin Can Bay RSL after being Secretary from 2012 – 2015 and in 2021. Well, Cherryl, all we can say is:

Thank you for your service!