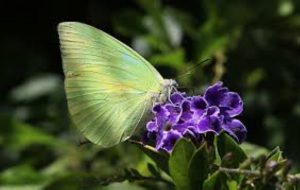 Last month brought a treat to the Cooloola Coast in the form of thousands of butterflies in flight. Enthusiast of creatures that fly, Kelvin Neilson from Cooloola Nature, sat at Norman Point marvelling at the largest migration of the Lemon Emigrant (Catopsilia pomona pomona), and the Yellow Migrant (Catopsilia gorgophone), he has ever observed at this time of year.

He explained that “both species larvae feed on native and introduced Cassia species. Breeding and succeeding migration depend on the availability of rain and the subsequent flush of new tender leaf and stem growth for the emerging larvae.”

Amongst the mix flashes of Blue Tigers (Tirumala hamatus hamatus) also peppered the air. Constant southeast bound waves of butterflies fluttered by, across the inlet and far away.

The spectacle usually observed in late September-October was most likely spurred on early by the recent rains after the long drought.

Kelvin foresees that as “climate change progresses, movements of migratory species such as Lepidoptera will become more erratic and opportunistic, rather than following usual seasonal patterns.”

Windscreens of passing motorists may have suffered but the sheer numbers present are a great natural indicator of a healthy environment.