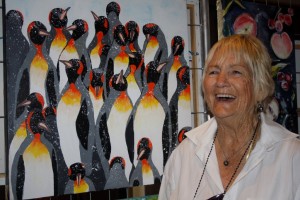 Judge Louise Macaulay called for a local sculptor to compete in national competitions,  described emerging artists in the youth and said, “I can hardly wait to see the movie!” about Graham Chappill drawings.

On Grant McFarlane’s The Octopus, Louise said, “The quality of this piece is very high and I would encourage this artist and sculptor to continue entering his beautiful work in Juried sculpture ‘call for artists’ competitions across the nation.”

Louise commented on how many artists captured our unique environment in their work,  “Having recently come to Rainbow Beach I have been deeply moved by the colours and the rolling waves.”

She said Robin Hines’ Last Light “conveys that feeling exactly and the blended use of contrasting purple, golds and azures will invite me back to reflect my thoughts in this beautiful space”.

She was also very impressed with the entries from school, and saw a lot of budding talent in the youngest classes.

Mayor Mick Curran said over 200 pieces of work were displayed in the 8th Rainbow Beach Art Festival, and he thanked the Sports Club and Afra Chappill for organising the event.

Afra even created the mystery painting with her mother, Genevieve Miller – it was won by Colleen Yallowley, who also won an encouragement award and People’s Choice for her Penguins in the Snow.

It is the last time Afra will be involved in the festival, as she and Graham prepare their move to Melbourne.

P&C representatives also thanked Afra and Rick at the Sports Club and all the helpers and locals for their support, through entry donations, commissions and the raffle – $922.50 is a great start to fundraising for the year!

Rick Modin said Afra’s talents would be missed, but assured the crowd that the Festival would be on again, and is on again every Australia Day weekend – so book it in for 2017! 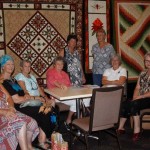 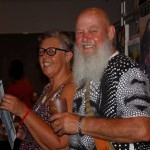 Gai Howe and David Cork from Cooloola Cove – Gai received an honourable mention for her Bird of Paradise, told the “miniature is a grand example of scratch board illustration” 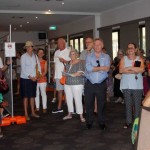 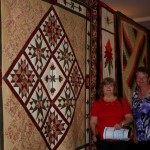 Encouragement Award recipient, Maree Sayers and her quilt Stars Over the Garden with fellow Tin Can Bay Quilter, Bev O’Rourke 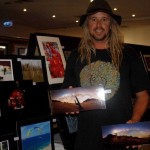 Luke Simpson was delighted with his win in Photography (Real life) 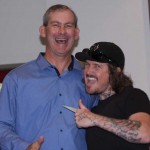